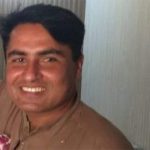 HYDERABAD: A journalist working for a Sindhi language daily was shot dead in Naushehro Feroze district on Saturday evening allegedly for writing against the local government representatives.

Chairman of Padidan Town Committee Shakeel Ahmed Rajper is among the six persons booked in the murder FIR, registered after local journalists blocked the Mehran Highway in a sit-in protest with the body.

“My son often used to tell me that he feels threatened from the town chairman and Habibullah Rajper,” Muhammad Iqbal Rajper, father of the slain 33-year-old journalist, Ali Sher Rajper, told media. According to him, his son had also informed the authorities about the threat.

The killing sparked protests in all major cities of Sindh, with the press clubs and unions of journalists demanding justice for the victim and arrest of the culprits regardless, of their political affiliation.

Ali Sher Rajper, who was general secretary of Padidan-based city press club, was attacked in a market area when he was returning after closing the club at around 10pm.

He was chased in the market and the assailants fired multiple gunshots at him. According to the medico-legal officer, Ali Sher Rajper sustained five gunshot wounds, including two on the chest and as many on his back, besides a bullet to the neck.

The incident’s FIR was registered on the complaint of Daud Rajper, a brother of the deceased. Four persons, including the town chairman Shakeel Ahmed Rajper, Habibullah, Ghulam Ali Rajper and Nazar Muhammad Rajper were nominated with names in addition to two unknown attackers. Padidan Police Station SHO Rana Junaid said the police have arrested Habibullah but the other accused are still at large.

According to police sources, Habibullah told the police that he attacked Rajper in response to a previous armed attack on him by the slain journalist.