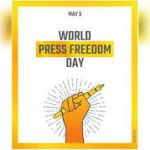 In Pakistan, the state of press freedom can be gauged from Hamid Mir’s question to the ISPR director-general that media should be allowed to interview the PTM and seek answers from them about the allegations levelled against them by the milt-establishment. Hamid Mir was not allowed to interview PTM leaders.

It can also be ascertained by the fact that PTM was not allowed to hold a press conference at the national press club in Islamabad to respond to the ISPR DG’s allegations against it.

Most of my journalist friends who work with media houses also lament that the space of their freedom is shrinking every day. Recently, Geo News Managing Director Azhar Abbas read a poem that journalists are not to write or speak the truth. Who else would know more than the chief of news who faces press advise everyday on what can be said and what is banned.

My friend Owais Tauheed, a leading journalist with an experience of foreign and local media, has a knack of storytelling. He posted a beautiful story about how the freedom of the press is curtailed. He ends that like childhood he fears the thickening darkness of the present times.

The all-powerful Dawn too had to drop the column of Cyril Almeida because of the pressures. A polite and decent journalist Shahzeb Jillani is being hounded is being hounded for criticising MPAs of Saudi Arabia on Khashoggi’s murder.

Article 19 – Freedom of speech – of the Constitution states that every citizen shall have the right to freedom of speech and expression, and there shall be freedom of the press, subject to any reasonable restrictions imposed by law in the interest of the glory of Islam or the integrity, security or defence of Pakistan or any part thereof, friendly relations with foreign States, public order, decency or morality, or in relation to contempt of court, [commission of] or incitement to an offence.

Even this constitution provision restricts discussion on the issues of national security or religious matters. Off late, CPEC is another sacred cow on which relevant questions cannot be raised.

According to this year’s World Press Freedom Index prepared by Reporters Without Borders, Pakistan slipped down to number 142 from last year’s ranking of 139. This confirms that media freedom has been further skewed in the last one year as stated above

He quoted an example of the Kargil war where the media was not allowed to report that its army people were being killed because the story which the government wanted to emphasise on was that the Kashmiri freedom fighters were fighting at Kargil and not the army. Twenty years down the lane, we all know that Kargil was an adventure undertaken by Musharraf and some of his colleagues which went wrong and then PM Nawaz Sharif had to run to seek help from President Clinton of the US to stop the war.

This was not an isolated incident where what was defined as national interest was actually harmful for the country.

The 1965 war was unleashed on the people of Pakistan only because Ayub Khan sent insurgents to Kashmir. Same was the case when we lost half the country because of the military operation in East Pakistan against the popular political party which won the 1970 election in a landslide victory. All this was done in the name of national interest and those who said that it was not in the national interest, were declared traitors.

Journalists should not be confused by the call of national interest which is defined by the ruling classes and the milt-establishment. While reporting or writing, they should rise above ethnic, religious and national prejudices. The only consideration a journalist should keep in mind is whether a policy of the state is pro-people or anti-people.

According to this year’s World Press Freedom Index prepared by Reporters Without Borders, Pakistan slipped down to number 142 from last year’s ranking of 139. This confirms that media freedom has been further skewed in the last one year as stated above.

As always, the questions being raised are: Should there be any limit to press freedom? Is press freedom possible without an independent judiciary?

The issue of limiting press freedom through media specific laws is often raised by people who are either from the privileged ruling classes or are still not ready to accept democratic values. There is little understanding even among some journalists that freedom of the press flows from freedom of expression, which in turn is only possible in a democratic society. The reason I have stressed the word society is that respect for freedom of expression is not just a political issue; it is an all encompassing social and economic issue as well.

World Press Freedom Day was internationally celebrated on 3rd May. Years of struggle by journalists, civil society and democratic forces has done little to force the ruling establishment of Pakistan to accept a free media. Privately owned channels are facing more pressure from the establishment and Islamist non-state actors. There are now new ways to control the media through bribing and influencing private sector channels’ owners and leading anchors. The owners of these private channels have bigger stakes and therefore easy to be squeezed.