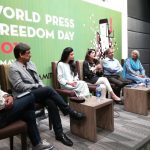 The first-ever two-day Sahafi Summit was held in Karachi to discuss at length fast emerging challenges to journalism in Pakistan, including threats to independent news media from digital disinformation and financial cuts.

Co-organised by Digital Journalists of Pakistan and Institute of Business Administration (IBA) Centre for Excellence in Journalism’s (CEJ) Media Matters for Democracy in partnership with UNESCO Pakistan, the EU; the embassies of the Kingdom of the Netherlands and Sweden in Pakistan and the DW Akademie in Karachi, the event was held from May 2 to May 3.

The national convention brought together journalists from the print, digital, and broadcast media working for a variety of mainstream and independent news publications all over the country.

UNESCO Pakistan Representative, Vibeke Jensen welcomed the participants at the event and reiterated the importance of independent media to build inclusive societies.

The summit generated robust and inclusive discussions on the current challenges faced by the news industry in Pakistan, which include the coordinated and malicious spread of disinformation; the crisis of media literacy; regulations and the broadcast media’s struggling business model for revenue generation.

Its breakout sessions tackled diverse themes and issues related to the media, such as the effects of disinformation on credible journalism; verification in the digital era and the need for media and information literacy.

The challenges faced by Pakistani women reporters were also discussed along with Pakistan’s media economy including the issue of mass layoffs, investment in digital news and services and the role of news media owners.

Kingdom of the Netherlands ambassador to Pakistan H.E. Ardi Stoios-Braken delivered the closing remarks at the second and last day of the summit.

They both recalled the key role of free media for any robust democracy.

The convention ended on May 3 with a message to stand united against digital, physical, and financial threats to journalists in Pakistan.