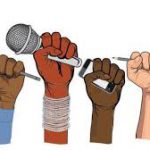 Here are ten key reasons why= press freedom remains crucial: first, questioning power: a truly free and independent press is a fundamental tool for holding those in and with power to account. When journalism aligns itself too closely with, or is co-opted by, any of these agents of power, citizens suffer. And, make no mistake about it…an alignment with corporate power can be just as corrosive to journalism.

Two, democracy: a vibrant, critical, free press is absolutely fundamental to a functioning democracy. Yes, it’s a cliché, but that doesn’t mean it isn’t true. A lack of free press could lead citizens to make decisions based on misinformation: decisions which might be against their own best interests and serve the interests of those already holding power.

Four, local matters: as we focus much of our attention on the national media, consider the pricelessness of good, local journalism, and what such journalism adds to a sense of community. How much of the nuance and specificity that is lost when stories are framed at the national level are brought back to life. Local journalism shows how issues of power, justice and community work at scales much easier to see and comprehend.

Five, global matters: just as good local journalism matters, so does good international reporting. Our personal experiences of the outside world can be very limited, so the power of journalism to ‘frame’ global politics for us is considerable. An independent, critical press doesn’t just tell us what happens abroad, it also explains broader international causes and the implications of those events, and does so by avoiding the use of lazy stereotypes.

Six, the devil is in the details: There is no substitute for depth, detail and context. None.

Sevem, storytelling: good journalism isn’t just about giving facts, it’s also about presenting facts in an engaging fashion. In other words, it’s about storytelling that appeals to multiple facets of our personalities, brains, emotions and intellects. The best journalism is art.

Eight, there’s more to life: there is life beyond politics, economy or the military. A free and independent press contributes to democracy and society by also covering the arts, culture, sports, etc. This brings us back to the notion of citizenship: good journalism that covers multiple aspects of human existence generates a synergy effect where the total is greater than the sum of the individual parts.

Nine, media investigate themselves: this is a tough one as it is very rare – but important. A free, vibrant and critical press also interrogates the power of the institutions of journalism and media in society. It interrogates the relationship between media, politics and the market. And, it interrogates how the media wield their considerable storytelling and agenda-setting power. It is self-reflexive and self-critical. The media are agents of power, and should be investigated as such.

Ten, the search for justice: some of the very best journalism exposes injustice, and leads to rectification of that injustice. Some people will say that this strays over into “activism.” This use of the term ‘activism’ is meant to suggest bias. But, given that justice is about fundamental fairness and the rejection of the exploitation of the less powerful by the more powerful, I see no contradiction.