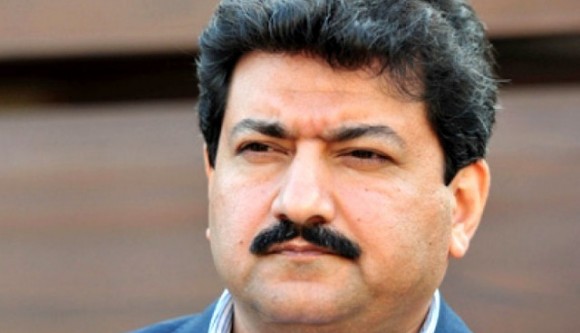 ISLAMABAD: Legislators in Upper House of parliament on Monday adopted a unanimous resolution to condemn the armed attack on journalist Hamid Mir. In the same breath, the senators urged all to stop bashing the Inter-Services Intelligence (ISI) and other intelligence agencies until the completion of the investigation by the judicial commission.

A majority of the legislators were of the view that without any proof, naming the chief of any big organisation was not good for the country.

Opposition leader in the Senate Aitizaz Ahsan said that no one was high enough to be exempted from appearing before the judicial commission, and some sections of the media had blamed the ISI, which had had a chequered past. “Let us not rush to form a judgement… we cannot blame the head of an institution of which I have been a severest critic,” he said, adding that the commission should complete its inquiry and until then everyone should show some restraint and balance.

In the past, he said the ISI provided training to Jihadi organisations for Afghanistan and occupied Jammu and Kashmir. He also claimed that the top intelligence agency was involved in the Asghar Khan case.

ANP Senator Haji Mohammad Adeel suggested that the intelligence agency itself should probe the case so that truth could come out. He also pointed out that the overall situation of law and order very weak in the country, especially in Karachi and Khyber Pakhtunkhwa.

Afrasiab Khattak said, “We are not against any institution and wanted to strengthen democracy and institutions through democratic norms.” He stressed the need for an impartial inquiry.

Senator Mushahid Hussain of the PML-Q also called upon people not to rush to conclusions and let the inquiry complete, because “the ISI is a national institution. It works under the Ministry of Defence, and the government should defend it”.

Apart from judicial inquiry, he suggested that inter-agency inquiry should also be carried out over the incident. He also suggested that a permanent joint parliamentary committee should be formed to deal with journalists’ issues, because such cases were on the rise.

MQM Senator Tahir Hussain Mashhadi said that “punching ISI and the army” was not good for the country’s interest. “Don’t blame anyone directly without any proof,” he added.

After the media walked out of the Senate, in an unprecedented move, Leader of the House Raja Zafarul Haq and Leader of the Opposition Aitzaz Ahsan met journalists to calm them down, and decided to form a five-member committee to look into the grievances of the media and suggest some measures. Later, the Senate suspended all business in solidarity with Hamid Mir to discuss the attack on him, but not before the members squabbled that the five-member committee did not have a woman.

The senators from the MQM and the JUI-F staged the walkout.

Later, the House unanimously adopted a resolution, condemning the armed attack on Hamid Mir.
The senators strongly condemned the cowardly attack on the life of Hamid Mir, terming it “yet another attack on freedom of expression”.

They said that journalists were frequently being attacked in Pakistan, so the government must find ways and means not only to provide protection to journalists but also trace and punish the culprits, because a free media is an indispensable pillar of Pakistan’s vibrant democracy.