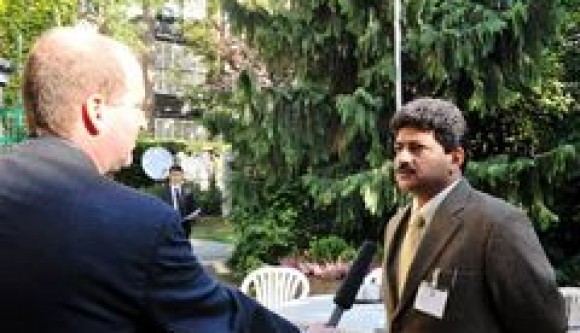 VIENNA, April 21, 2014 – Pakistani journalist Hamid Mir, a renowned television presenter with the country’s Geo TV, was the victim of yet another attack on Saturday evening, which left him seriously wounded.

Unidentified gunmen opened fire on Mir’s car as the journalist was driving on his way from the Karachi airport to the studios of Geo TV. Mir, who was hit by six bullets, was rushed to a local hospital. According to reports, the journalist is currently in stable condition.

Following the attack, Mir’s brother, Amir, a well known investigative journalist with The News International, publicly stated that “elements in the ISI and its chief Lt Gen Zaheerul Islam should be blamed” for the attack against his brother. But a spokesman for the Inter-Service Intelligence (ISI), Pakistan’s powerful intelligence agency, said “that allegations against ISI or [the] head of ISI without any basis is highly regrettable and misleading”, The Express Tribune reported.

In March this year, following a meeting with a Committee to Protect Journalists’ delegation, Pakistani Prime Minister Nawaz Sharif promised to take steps to stop attacks against journalists. But journalists across the country have staged demonstrations condemning the attack against Mir and the government’s failure to ensure safety for their colleagues.

“Hamid Mir, who is the anchor of one of Pakistan’s most popular talk show, was shot by an assailant who knew of Mir’s travel plans,” Ali, who is also Chairman of Pakistan Press International (PPI), explained to IPI today, highlighting the failure of police to stop the attackers.

“After shooting at Mir’s car, the attacker was given a ride on a motorcyclist by an accomplice and was joined by another motorcyclist and car, who chased Mir for many miles as they continued to shoot at his car.

“All this happened in broad daylight in one of the busiest roads of Pakistan’s largest city. The attackers were not challenged by any law enforcement agencies and they easily managed to escape.”

Ali noted: “Those in authority knew of the threats to the life of Mir and yet they did absolutely nothing to provide security to Mir.”

Following the event, which was strongly condemned by Pakistan’s politicians, Prime Minister Sharif ordered a judicial inquiry into the attack and decided to constitute a three-member judicial commission to probe the murder attempt on Mir. On Monday Pakistan’s Chief Justice Tassaduq Hussain Jillani approved the names of three Supreme Court judges to form the judicial commission.

“There is also need to seriously investigate allegations by Mir’s brother that Mir had told his family, employers, government officials and army officials that some officials of Pakistan’s Inter Services Intelligence, including ISI’s chief Lt. Gen Zaheerul Islam had prepared a plan to eliminate him.”

Journalists in Pakistan are often targeted because of their coverage and impunity remains a major problem. According to the IPI Death Watch, nine journalists were killed in 2013 in Pakistan, where IPI has recorded some of the highest figures of journalists killed in the past 10 years.

In November 2012, Mir escaped a bid on his life, after an explosive device was found under his car. Local and international news outlets reported that the attack may have been connected with Mir’s coverage of the shooting of teenage activist Malala Yousafzai, for which he received open criticism by the Pakistani Taliban. On that occasion, IPI reported that Mir, who does not shy away from covering the sensitive political and security situation, said he could not be sure who was behind the act, as he had received threats from the Taliban as well as from “state actors”.