Home » Impunity » Attackers of Hamid Mir will be brought to book, says Nawaz 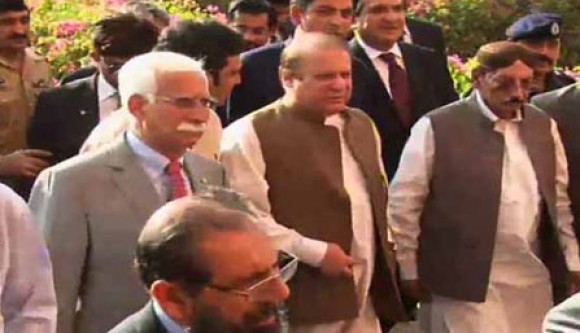 KARACHI: Prime Minister Nawaz Sharif said on Monday whosoever was involved in the attack on Geo News anchorperson Hamid Mir would be brought to the book. He said an independent judicial inquiry commission had been constituted to probe the incident and findings of this commission once it concluded its investigations would be made public.

Prime Minister Nawaz Sharif said this here on Monday as he visited the Aga Khan Hospital to inquire after Hamid Mir, who has been under treatment there after getting injured in an armed attack near the Karachi Airport on April 19.

The prime minister, while talking to the newsmen present on the occasion, said that law enforcement agencies concerned had been conducting an investigation on full-fledged basis into the attack on Hamid Mir so that criminals behind the incident could be brought to justice without undue delay.

The PM condemned in the strongest terms the attack on senior anchorperson saying that by grace of God, the life of senior journalist had been saved. He said the criminal elements responsible for the incident would be brought to justice at all costs.

The PM also prayed for early recovery of Hamid Mir so that he could rejoin the journalistic fraternity and perform his duties.

On the question about the law and order situation in Karachi, the PM said that terrorism and adverse law and order conditions were not peculiar to Karachi alone but had been a problem of the entire country.

Nawaz Sharif said that a targeted operation against criminals and terrorists in Karachi was going on and getting positive and encouraging results. He said the government would continue with its efforts to improve the law and order situation in Karachi.

Meanwhile, chairing a meeting at the Karachi Airport to review the law and order situation in Karachi, Prime Minister Nawaz Sharif said the federal government would provide all possible support to the Sindh government in procurement of the latest technology in the latter’s drive to prevent and counter crimes in the metropolis.

He also instructed the law-enforcement agencies to adopt a shared strategy and conduct actions with support and coordination of each other to cleanse the city of menacing criminals, extortionists, and target killers. He emphasised that intelligence agencies concerned should also maintain close liaison and networking with each other for countering the wave of crimes and terrorism in the city.

The prime minister said he would not tolerate any slackness in efforts being made by the authorities concerned in restoration of the law and order situation in Karachi while the ongoing targeted operation against criminals in Karachi should be brought to a logical conclusion without coming under any undue influence.

Our Sukkur correspondent adds: Earlier, Prime Minister Nawaz Sharif resolved that his government would expedite work on power projects to overcome the energy crisis in the country.

Addressing a ceremony after inaugurating two power plants at Guddu in Kashmore district, the PM said that the country would not have faced the current power shortage had the projects initiated in 1999 not been stalled. He said that his government had started ‘reconstruction’ with a renewed vigour to make up for the time lost. He reiterated his government’s resolve to end the power and gas loadshedding.

The prime minister thanked the Chinese company for its assistance in the project. He eulogised Pakistan’s longstanding friendship with China.

Prime Minister Nawaz Sharif promised dozens of power plants in the country with the help of China, adding that all power projects would be completed soon. These power plants would help fill in the gap between demand and supply of power. Also, the foundation stone of the Karachi-Lahore Motorway would be laid soon.

Earlier, Minister for Water and Power Khawaja Asif gave a detailed briefing on the project to the PM. Three power plants have the combined capacity to produce 747MW. Two units have become operational while the third is expected to be commissioned in May.

Constructed with Chinese assistance by M/s Harbin Electric International Company, the work on the project has been completed in six months at the cost of Rs60 billion.