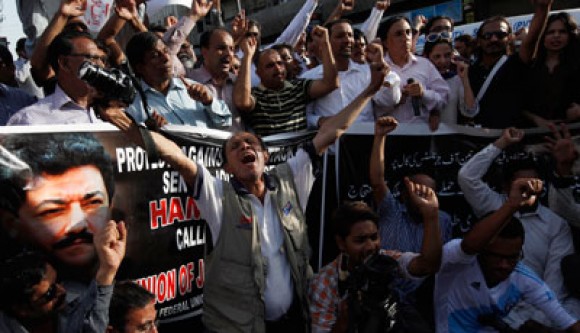 For CPJ, most of this weekend was taken up learning about and responding to the assassination attempt on Geo TV’s most prominent anchor and commentator, Hamid Mir. CPJ quickly released a statement after the attack and fielded questions from international and Pakistani media almost nonstop. On Sunday, I met with about 30 Pakistani journalists and community leaders in New York to discuss the situation. The government has offered a reward of 10 million Pakistani rupees (about $102,000) for information leading to the apprehension of the people who tried to kill the very high-profile Mir.

This weekend’s response wasn’t unlike that on March 28, when gunmen sprayed the car of TV anchor and widely-respected analyst Raza Rumi, a member of the Express Group of media organizations. And we handled a flood of questions after the January 17 attack on an Express TV van in Karachi, in which three media workers were killed and a cameraman injured. It was the third attack in eight months on the Express Media Group. An attack on an Express bureau chief’s home was the fourth. The attack on Rumi was the fifth.

But in the middle of all the phone calling and emailing in the last few days, I received two email messages that took the focus off Mir and Raza Rumi, but are, in fact, all part of the same problem. I’ve conjoined both messages and edited them to make them a bit clearer:

Still we are waiting for justice regarding Shan Dahar’s case, please raise case of Shan along with Hamid Mir. No more investigation is done in this case, please take up our case to [the] government level. And make this statement possible for other journalists in Pakistan "Protecting Pakistan journalists"

We have submitted an application to our honorable Deputy Inspector General of Police Larkana Division for a re-investigation of Shan Dahar’s case one week before, but no output. We need your support & cooperation all the time. Could you please follow up our case with higher authorities, we don’t have approach nor any source. Your prompt action will be highly appreciated, awaiting suitable response.

My CPJ colleague Elisabeth Witchel, our international expert on questions of impunity in the killing of journalists, and I met Riaz and Fouzia in Karachi in March, a week or so prior to a CPJ delegation meeting with Prime Minister Nawaz Sharif and Information and Law Minister Pervaiz Rasheed. The couple is adamant in pursuing justice for Shan Dahar, and we’ve promised them that we would raise their case whenever we could.

There has been little substantive movement in the investigation of the shooting death of Dahar, a local reporter for Abb Takk television. He died on January 1 this year, while filming near a pharmacy in Larkana. He had already produced one story on prescription drugs being illegally resold in the town, and was taking video of a package bearing a “not for resale” label on it shortly before he was shot, according to his family. Nasir Baig Chughtai, the director of news for Abb Takk, confirms that Dahar was on assignment at the time he was killed. He died in the hospital after waiting for hours for medical treatment, which never came, possibly because it was the New Year holiday.

CPJ’s data show that 96 percent of journalists murdered around the world are local journalists covering local stories. Dahar’s case is every bit as typical of that reality as the murder attempts on Rumi or Mir. And worse, in 90 percent of the cases of journalists killed, no one is brought to justice–the killings happen with impunity. Pakistan has the world’s ninth worst record for bringing the killers of journalists to justice, according to CPJ’s annual Impunity Index.

So, starting on January 1: An increasingly bad record for the Nawaz Sharif government in terms of journalists’ safety. Much has been made of the somewhat successful prosecution in March of some of the perpetrators, but none of the masterminds, in the January 2011 murder of Geo TV reporter Wali Khan Babar. But the credit for that cannot be given to the Sharif government. The trial was underway when the government came to power and former Supreme Court Chief Justice Iftikhar Chaudhry was instrumental in pressuring the federal and Sindh governments to bring the trial to a conclusion. What worked were the tactics of hearing the case in an Anti-Terrorist Court; changing of the trial venue to a less dangerous location; the use of special prosecutors; and a witness protection program for those with the courage to testify. This has emerged as a model for such politically sensitive trials, even though they may come at a cost: In early April Abdul Saboor, the brother of Abdul Maroof, the special public prosecutor in Wali Khan Babar murder case, was killed by unidentified men. No motive has been ascertained, police say.

When CPJ met with Sharif and Pervaiz Rasheed in March, we walked away with the feeling that the government realizes it has a problem when it comes to journalists’ security and is ready to take steps to deal with it. Amid the ongoing killings, attacks and unrelenting threats, their plans are coming closer to be realized.

In an April 14 piece in The Express Tribune, “Protecting Pakistan journalists” Mazhar Abbas, who won a CPJ International Press Freedom Award in 2007, outlines where things stand in terms of the government’s efforts to address the problem legislatively. Abbas, a former secretary-general of the Pakistan Federal Union of Journalists, is far from a government apologist. He remains a strong advocate of journalists in the best trade-union tradition. But even he says, “There is a sense of realization within the government that the security of media in Pakistan is the responsibility of the state.”

Abbas explains that in recent days the government submitted 20 draft proposals for consideration by the National Assembly, which arose out of its consultations with most of the stakeholders to the problem. The proposals cover everything from insurance for journalists to safety training, who pays for protective gear for staff on dangerous assignments, and how quickly attacks on journalists must be investigated and brought to trial. A main forum for that discussion has been the Pakistan Coalition on Media Safety, a group that arose just over a year ago out of a U.N. conference in Islamabad, the International Conference on Safety & Security of Pakistani Journalists. Now, in 2014, a year later, Abbas says he hopes the legislation to protect journalists will be enacted by World Press Freedom Day, May 3, 2015, a year from now–an optimistic but achievable deadline.

Meanwhile: After this weekend’s attack on Mir, the highly respected Zohra Yusuf of the Human Rights Commission of Pakistan said, Protecting Pakistan journalists “There should be an independent and judicial inquiry commission but that should not end like the one established to probe into killing of journalist Saleem Shahzad. This time the attempt went unsuccessful so there is a need to inquire about the details and people behind the attack before they plan another one.” Her idea was adopted by the government on Sunday.

CPJ has been highly skeptical of the value of special judicial inquiries and tribunals like those called for by the HRCP’s Yusuf. See, for example, “Justice for Saleem Shahzad? We’ve seen this before…” and “What should happen following the Raza Rumi attack.” We feel that special investigations, even when they include high-ranking judicial figures, circumvent the basic application of the laws of the country for the crime of murder: a police investigation, the appointment of a prosecutor, a trial, a conviction, and a sentencing. We feel that as the government waits for its proposed new legislation, it should use those tools it already has, the tools it used in the Babar case, to continue to prosecute the ongoing attacks on journalists. The threats and violence remain as prevalent as they ever have been, and show no signs of abating. Prosecutions of those who would kill journalists should start now. Protecting Pakistan journalists

Bob Dietz, coordinator of CPJ’s Asia Program, has reported across the continent for news outlets such as CNN and Asiaweek. He has led numerous CPJ missions, including ones to Afghanistan, Pakistan, the Philippines, and Sri Lanka. Follow him on Twitter @cpjasia and Facebook @ CPJ Asia Desk.