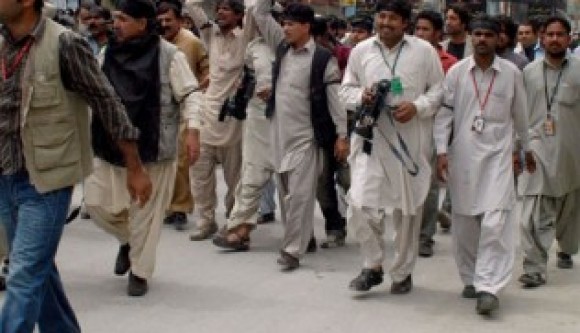 Pakistani authorities should dismiss separate complaints filed against newspapers and journalists in Baluchistan for publishing statements made by banned militant groups, the Committee to Protect Journalists said today.

BBC Urdu reported that police in the provincial capital of Quetta had filed a First Information Report, or complaint, on Wednesday against at least seven Baluch dailies and Pakistani journalists and publishers in connection with their publication of a statement by the banned Lashkar-e-Jhangvi group. Reports said the statement was in relation to a suicide bombing but did not offer further details. The complaint named dailies Qudrat, Bakhabar, Zamana, Jang, Mashriq, Express and Intekhab as some of the defendants. Reports did not immediately identify the names of any journalists or publishers.

Last month, another complaint was also filed against four of the papers–Jang, Mashriq, Express, and Intekhab–for publishing a statement by Jaish-ul-Islam, a Sunni militant group accused of carrying out attacks against Shias in Baluchistan. In the statement, the group claimed responsibility for killing a police officer, reports said.

The defendants can face charges under Pakistan’s Anti-Terrorism Act, which prohibits the “…printing, publishing, or disseminating of any material … that glorifies terrorists or terrorist activities, incites religious, sectarian or ethnic hatred, or gives projection to any person … or organization concerned in terrorism,” according to news reports.

The defendants can also face charges that include contempt of court for disregarding a provincial high court’s decision that forbids news outlets from publishing or broadcasting statements by banned militant groups, reports said. In October, Pakistan’s Supreme Court upheld the provincial court’s decision.

The Baluch press work in a dangerous climate, under pressure to report in line with the views of several elements, including pro-Taliban groups, security forces, and intelligence agencies, as well as Baluch separatists and state-sponsored anti-separatist militant groups. CPJ research shows that journalists in Baluchistan are threatened for not publishing statements made by militant groups.

A hearing for the case has been scheduled for May 30, reports said.