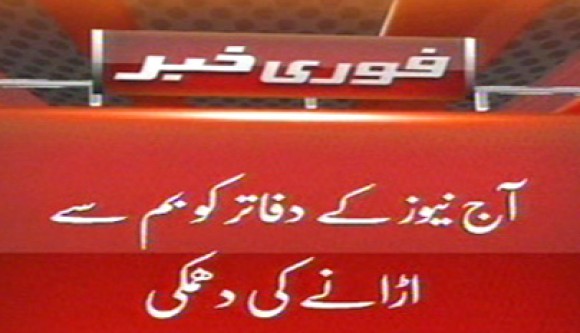 The offices of Aaj TV channel across the country were evacuated after it received a bomb threat on Friday morning. The threat was made through a postal mail to television’s Islamabad bureau purportedly by Ghulam Mustafa who claimed that he and his associates had already abducted the son of former prime minister Yousuf Raza Gilani.

According to that letter, “Let the Aaj TV know about the bomb planted in its office. It will be detonated if it did not broadcast Sadiq Butt; will kidnap your wife and daughter…” “Ghulam Mustafa is innocent and it’s not his handwriting,” said the suspect’s brother, Sabir at his Multan residence, saying his brother had lost the identity card two months ago. Aaj TV learnt that Nadra issued him a new identity card on February 24, 2012.

The threat created panic across the TV channel and Business Recorder, bringing their daily editorial operations to a halt. The police immediately reached Aaj News head office. Bomb disposal squad was also called in to assist. According to the TV channel, in line with the initial investigation of law enforcing agencies, the suspect had been found threatening several institutions of exploding them with bombs.

He served a term of three-month in jail for being accused of threats. Ghulam Mustafa is a Multan resident whom police raided to nab but was missing from home for the last two days with no contacts with family, police say. The interior minister, Malik Habib took a notice of the incident. The Nadra has also confirmed both identity cards are original. The suspect’s brother, however, said that Mustafa is in Islamabad but having no phone contacts with his family.