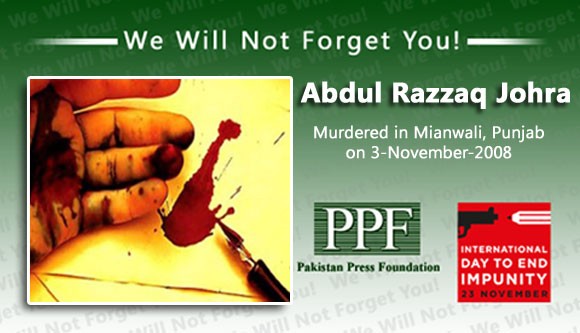 Abdul Razzak Johra, a reporter with the Royal TV network, in Mianwali district in Pakistan’s Punjab province was murdered. A local drug dealers are believed to be responsible for the murder on November 3.

Royal TV said Johra had prepared several reports on drug-related crime, and he is believed to have received threats for some time.

One suspect was reportedly arrested on November 11.

Seven journalists have been killed in Pakistan this year. The most recent incident was on November 8, when Qari Mohammad Shoaib was shot dead by security forces in the conflict-ridden Swat valley in north-western Pakistan.

“These past few days have been extremely distressing for journalists in Pakistan,” IFJ Asia- Pacific said.

“With seven killings so far this year, Pakistan has the unfortunate distinction of being the most dangerous country for journalists and media workers in the Asia-Pacific region.”

On November 12, the PFUJ and the All Pakistan Newspapers Employees’ Confederation (APNEC) led journalists across the country in demonstrations against the killings of their colleagues, and demanded authorities fully investigate and bring to justice those responsible.

Local authorities detained the pair as they sought to report on the funeral of six people. They were freed after images were removed from their camera, although a sequestered mobile phone has not been returned.