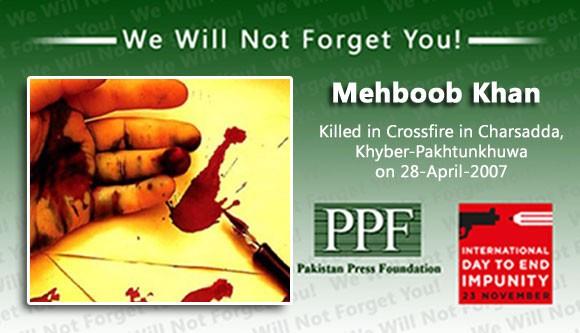 Mehboob Khan, a young freelance news photographer was killed on 28 April 2007 in a suicide bombing aimed at Interior Minister Aftab Khan Sherpao, in the northwestern district of Charsadda. Four other journalists were injured by the blast.

“Suicide bombings against civilians are appalling,” Reporters Without Borders said. “They aim to kill and maim indiscriminately, and pose serious security problems for journalists, especially photographers and cameramen, who have to follow politicians closely. The instigators of suicide bombings should be tried as war criminals.”

Many journalists have been killed by suicide bombings in Afghanistan and Iraq.

Aged 22, Khan was one of a total of 28 people killed by the Charsadda bomb. He died instantly. He was based in the district, located near Peshawar, and his photos were often used by both local publications and correspondents working for the national media.

The four journalists injured by the bomb were ATV cameraman Arif Yousafzai, reporter Siddiqullah of the Urdu-language newspaper “Subah”, Ayaz Muhammad of the Associated Press of Pakistan and Press Information Department photographer Arshad Ali. Siddiqullah was hospitalized with shrapnel lodged in his leg.

Yousafzai told Reporters Without Borders he would have been killed had it not been for the bodies of other victims that fell on him.