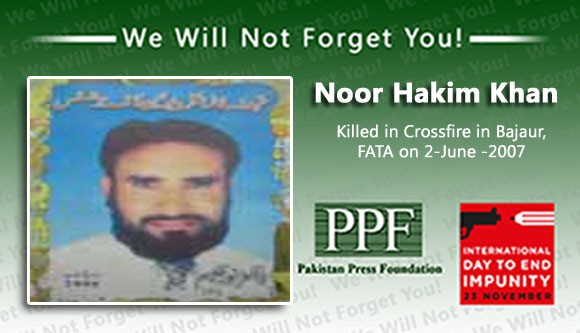 Noor Hakim, a reporter for the Urdu-language daily “Pakistan” and vice-president of the Tribal Union of Journalists was killed along with four other people in a bombing in Bajaur, in the northwestern Tribal Areas, on 2 June 2007.

“We address our condolences to his wife, son and three daughters and his colleagues in the Union of Tribal Journalists,” the press freedom organisation said. “This bombing cruelly highlights the violence of the armed groups and terrorists groups operating in the Tribal Areas. We urge journalists to step up security precautions when moving about and we call on the authorities to identify those responsible and bring them to trial.”

The fourth journalist to be killed in the Tribal Areas since February 2005, Hakim was travelling with an official and tribal chief from the Salkarzai region in a vehicle that was blown up by a remote-controlled bomb, killing all five occupants on the spot.

Hakim had been invited by the local government to cover the demolition of the house of a man suspected of murder. A journalist from the Bajaur region told Reporters Without Borders that the vehicle carrying Hakim and the official appeared to have been targeted, as two preceding vehicles in the convoy went by before the bomb exploded. The region adjoins the Afghan province of Kunar.

Hakim had just been elected vice-president of the Tribal Union of Journalists. Its secretary-general, Aurangzeb Afridi, proclaimed three days of mourning for the organisation’s members. “We have asked the government to investigate this bombing and to bring Noor Hakim’s murderers to justice,” he said.

Journalists Amir Nawab Khan and Allah Noor Wazir were shot dead by gunmen in Wana, in Waziristan, in February 2005. Reporter Hayatullah Khan was found dead in Waziristan on 16 June 2006, six months after being kidnapped.