Home » Slider » One cameraman shot dead, another critically wounded, other journalists injured during clashes in Islamabad 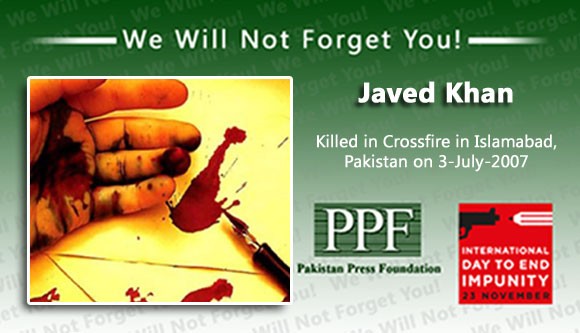 One photojournalist was killed and several injured on 3 July 2007 while covering clashes between law enforcement agents and the students of Lal Masjid (Red Mosque) in Pakistan’s capital city, Islamabad. The administration and students of Lal Masjid have been engaged in confrontations with the government since January.

Javed Khan, cameraman of the Islamabad-based daily “Markaz” and of the UK-based DM Digital TV television station, lost his life after he was hit in the chest and neck by stray bullets thought to have been fired by paramilitary rangers. Khan was rushed to the hospital but passed away during surgery.

CNBC TV cameraman Israr Ahmed was wounded by three bullets. He is in critical condition with injuries to his spinal cord. Both Khan and Ahmed were injured when they were filming the burning vehicles parked inside a government building set ablaze by students of the Lal Masjid.

Geo TV bureau chief Absar Alam was hit by a stone thrown by students belonging to Lal Masjid, and required stitches to treat the injury.

Several other journalists sustained minor injuries due to teargas shelling.