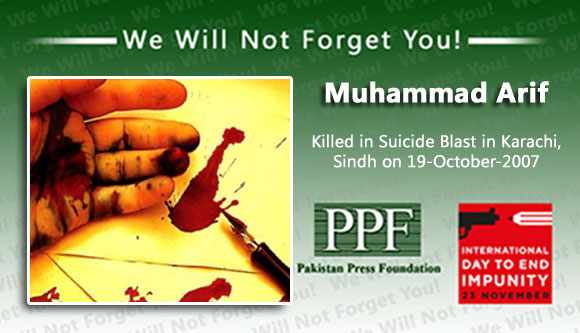 A cameraman for a local national television channel was among the 138 people killed in bomb blasts in the crowded procession to welcome former Prime Minister Benazir Bhutto on her return to Karachi, Pakistan after eight years of self imposed exile. The two bomb blasts that occurred just after midnight on 19 October 2007 also injured a number of journalists who had to be treated for shrapnel wounds.

The deceased, Muhammad Arif, a cameraman with the private “ARY One World” television channel, leaves behind a young wife and six children, aged between one and seven. He was recently transferred to ARY’s London office and had delayed his departure to cover the arrival of Benazir Bhutto.

Among those injured is Rashid Ali Panhwar, a reporter associated with the Electronic News Gathering (ENG) service of the state owned Associated Press of Pakistan (APP), who underwent surgery for the removal of six inch shrapnel from his abdomen. Talat Anjum, a cameraman with “APNA” television channel, and Syed Athar Hussain, a photographer with the daily “Jurrat”, were also among those injured.

Arif and the injured journalists were covering the arrival of Bhutto, who herself escaped unhurt in the blasts.