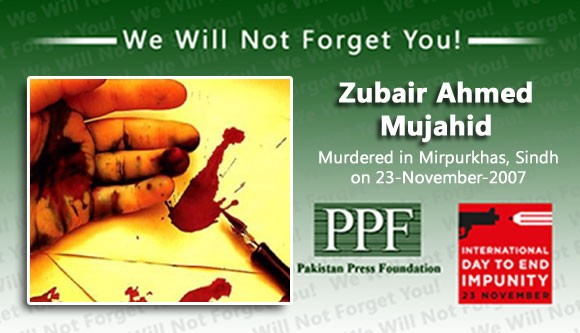 Zubair Ahmed Mujahid, correspondent for the national daily “Jang”, was riding a motorbike in the town of Mirpurkhas on 23 November, when unidentified armed men opened fire and killed him.

Mujahid was killed because of “his articles criticising the situation of the poor,” Mujahid’s elder brother told RSF. He wrote a weekly column called “Crime and Punishment” in which he often criticised landowners and police for mistreating the poor. One of his reports led to arrests of local policemen involved in violence against villagers.

“This tragedy is further proof that the authorities are unable to ensure journalists’ safety,” says RSF.

Since President Pervez Musharraf’s declaration of a state of emergency on 3 November, dozens of journalists have been beaten and arrested. But journalists remain defiant and are continuing to protest against the media curbs, reports the International Federation of Journalists (IFJ). On 20 November, more than 180 journalists in Karachi were arrested for protesting against the continuing broadcasting ban on two popular TV stations, GEO TV and ARY Digital. Four journalists were charged with offences related to disturbing the peace, IFJ says. A reporter for Aaj television station, Khurram Hashmi, was abducted and severely beaten by four armed police before being dumped on a side street, says PPF.

Solidarity protests have also extended to neighbouring countries in South Asia, says the South Asian Free Media Association (SAMFA). The Federation of Nepali Journalists (FNJ) presented the Pakistan embassy with a memorandum signed by 20 different rights organisations on 15 November. In Bangladesh, union members are demanding that the draconian press laws in Pakistan be scrapped.

According to IFJ, which recently went to Pakistan on an international crisis mission, media owners are collaborating with journalists to consider further joint actions, including a proposal that the media go on strike and shut down operations for 24 or 48 hours.

Musharraf has mostly targeted political opponents, lawyers and journalists, rather than the militants leading an increasingly strong insurgency, say Musharraf’s critics. Suicide bombers killed an estimated 35 people in nearly simultaneous blasts on 24 November in Rawalpindi, a garrison city at the heart of Pakistan’s security establishment. Pro-Taliban militants who are fighting security forces in the tribal areas are suspected to be behind the attack.