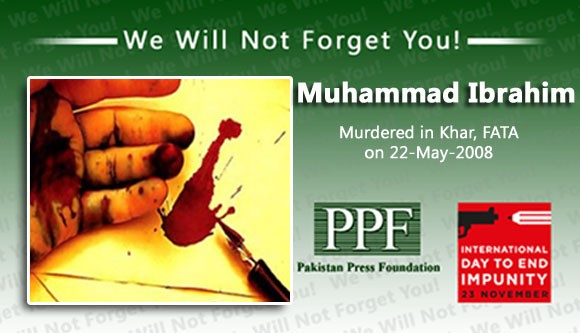 A Pakistani reporter was gunned down on 22 May as he was returning from an interview with a Taliban leader on the Pakistan-Afghanistan border.

Mohammed Ibrahim Khan, a reporter for privately-owned Express TV and its Urdu-language sister daily “Express”, was shot to death by unidentified men outside Khar, the main town of the Bajaur tribal area in Pakistan’s North West Frontier Province.

The journalist, the general secretary of the Bajaur branch of the Tribal Union of Journalists, was returning by motorcycle from an interview with local Taliban spokesman Maulvi Omar. According to Reporters Without Borders (RSF), the attackers took Ibrahim’s camera, mobile phone and notes before shooting him and leaving his body at the roadside.

“It is becoming more and more difficult for journalists to work in the tribal areas because of the region’s growing instability, which is closely linked to the war in Afghanistan,” says RSF.

Local authorities and international Afghanistan-based military forces have been fighting with militant groups for control of the conflict-ridden area. Noor Hakim Khan, a “Daily Pakistan” correspondent, was killed in a roadside bomb in Bajaur in June 2007, says the Committee to Protect Journalists (CPJ).

The International Federation of Journalists (IFJ) and its affiliate the Pakistan Federal Union of Journalists (PFUJ) have called upon media organisations to increase safety practices and to provide comprehensive insurance coverage, especially for journalists working in the tribal areas.

The Taliban and other armed Islamic groups operating in the tribal areas on both sides of the border between Afghanistan and Pakistan have been included in RSF’s list of “Predators of Press Freedom” because of their repeated attacks on journalists. Pakistan is also identified by CPJ as among one of the 13 countries with the poorest records for solving journalists’ murders.