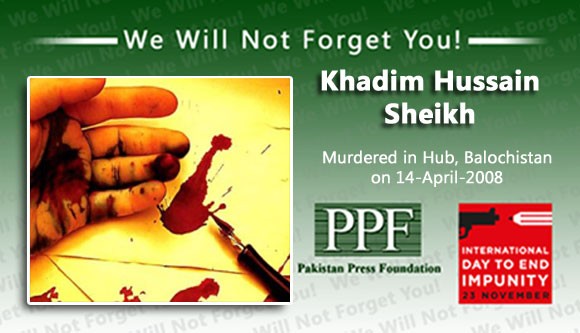 Khadim Hussain Sheikh, a stringer for Sindh TV, was killed by unidentified gunmen as he left his home by motorbike in the town of Hub, 23 miles (35km) north of Karachi, according to the Pakistan Federation of Journalists Union (PFUJ) and the Associated Press of Pakistan. Sheikh was also the local bureau chief for the national Urdu-language daily newspaper Khabrein, according to Mazhar Abbas, secretary-general of the PFUJ. The motive for the killing is unknown, Abbas told CPJ.

Abbas had spoken by telephone with Sheikh’s brother, Ishaq Sheikh, who was riding the same motorbike at the time of the attack and has been hospitalized with gunshot wounds, Abbas said. Ishaq told reporters and police that three men on motorbikes carried out the shooting, then checked to make sure his brother was dead before fleeing the scene, according to Abbas. Ishaq said he was unaware of any personal dispute that might have led to Sheikh’s murder, Abbas said.

“We offer our condolences to the family and colleagues of Khadim Hussain Sheikh,” said CPJ Asia Program Coordinator Bob Dietz. “We urge the newly elected government to demonstrate its commitment to protecting the press by vigorously investigating this case, which would help break the cycle of impunity that surrounds the killing of journalists.”

Minister for Information and Broadcasting Sherry Rehman called for a probe into the murder today, according to the Associated Press of Pakistan.

The coalition government of Pakistan has begun to move to repeal some of the draconian media restrictions put into place by President Pervez Musharraf in November 2007.

Control of Baluchistan province, which is rich in natural gas reserves, is the subject of a protracted and violent dispute between Pakistan’s central government and ethnic Baluch militants. Chishti Mujahid, a columnist and photojournalist for the weekly magazine Akbar-e-Jehan was shot and killed, apparently by militants, in the province’s capital city of Quetta in February.