Home » Slider » Journalist kidnapped and jailed by Taliban, then killed in air raid 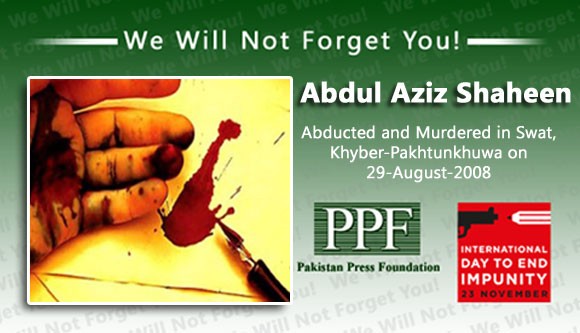 Abdul Aziz Shaheen, a local journalist working for local dailies “Azadi” and “Khabarkar” in the troubled district of Swat in the NWFP province of Pakistan, was killed on 29 August 2008, in an attack by jet fighters on a Taliban hideout, where he was being held by the Taliban.

Shaheen had gone to the Peuchar area of Tehsil Matta of Swat to investigate who was responsible for setting his car on fire a week earlier. As he was talking to local people, the local Taliban kidnapped Shaheen and imprisoned him in a private Taliban jail.

A spokesman of Taliban Muslim Khan told media that the compound where Shaheen was detained was attacked by a jet fighter and the journalist was among more than 20 persons reported killed in the air attack.

Shaheen, 35, leaves behind a wife, three sons and one daughter. He was buried on 31 August. His colleagues said Shaheen was a brave and bold journalist and that the Taliban were angered by the many reports that he had written about their activities.

The Pakistan Federal Union of Journalists (PFUJ) strongly condemned the killing of Shaheen. A statement issued by the PFUJ said “the government appears to be non-serious towards security issues confronting journalists, particularly in the tribal areas.” The PFUJ statement added that journalists were getting life threats and some even received warning letters to leave the area.