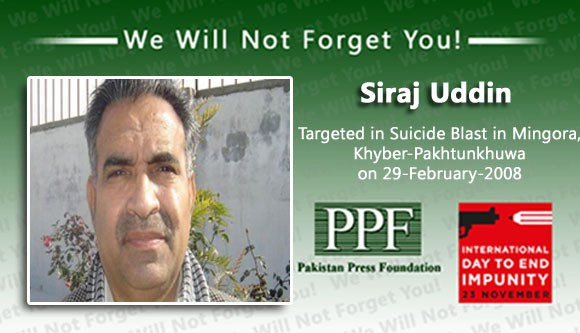 Siraj Uddin, a correspondent of the English-language newspaper “The Nation”, was one of at least 40 people who were killed when a suicide bomber blew himself up at the funeral of a slain police officer on 29 February 2008, in Mingora, a city in the troubled Swat valley of the North-West Frontier Province that has been under a curfew since the start of 2008.

No organisation has claimed responsibility for the attack on the funeral, which was being attended by about 800 people. Some 80 people were wounded by the blast, including Hazrat Bilal, a journalist working for the local press who sustained multiple injuries. He is now in hospital, where his condition is stable.

“We condemn these acts of devastating and indiscriminate violence to which the civilian population is exposed,” Reporters Without Borders said. “Uddin is the second journalist to be killed in Pakistan since the start of January, after a particularly grim year in which six journalists were killed. Our thoughts are with his family and colleagues and we hope Bilal makes a complete recovery.”

Pakistan was ranked 152nd out of 169 countries in the 2007 Reporters Without Borders world press freedom index.