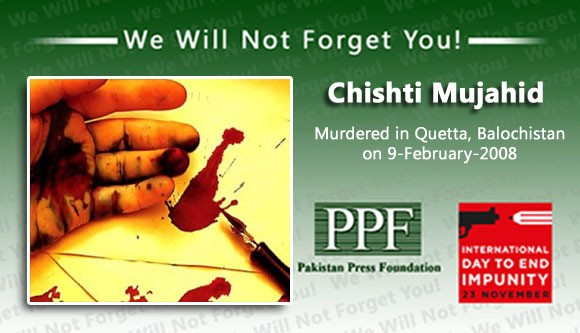 Dr. Abdus Samad Chishti Mujahid, a photographer and columnist for the Urdu-language weekly magazine “Akhbar-e-Jehan”, was fatally shot on 9 February by a gunman in Quetta, the capital city of Balochistan province, which borders Afghanistan.

Mujahid was shot twice as he was coming out of his house with his wife to go to work. He was rushed to hospital where he succumbed to his injuries. According to RSF, the gunman and his accomplice fled and police took 90 minutes to get to the scene.

The Baloch Liberation Army (BLA), a nationalist and separatist group, has claimed responsibility for the killing. According to press reports, a BLA spokesman told the Quetta Press Club that Mujahid had been killed because he was working against the Baloch cause.

The murder of Mujahid is the first incident where an organised armed group has claimed responsibility for the targeted killing of a journalist in Pakistan, says the Pakistan Federal Union of Journalists (PFUJ), an IFJ affiliate.

In November, Mujahid had written an article about the killing of one of BLA’s leaders and used a “strongly worded” headline, says RSF.

Members of the Balochistan Union of Journalists, the Quetta Press Club and PFUJ staged a demonstration on 10 February in Quetta, condemning the murder and demanding the arrest of the gunmen.

According to IFJ and RSF, six journalists were murdered in Pakistan in 2007, making the country one of the most dangerous for the press last year.