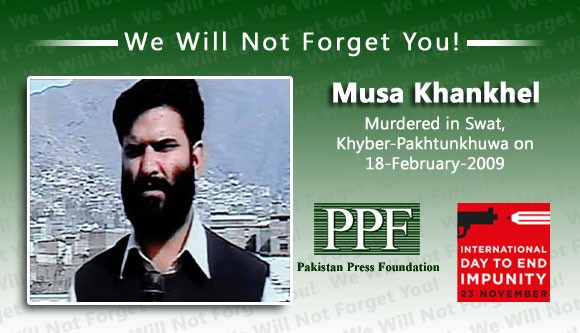 A journalist has been murdered in Pakistan’s Swat Valley, the first violation of a truce called last week between government and local militant groups, report the Pakistan Press Foundation (PPF), the Committee to Protect Journalists (CPJ), the World Association of Newspapers (WAN) and other IFEX members.

Musa Khankhel of Geo TV and the daily paper “The News” was found dead with a dozen gunshot wounds to his head and body on 18 February in a militant-controlled area near the town of Matta, after he separated from his reporting team.

The motive is not clear, although Khankhel had been covering a peace march led by Muslim cleric Sufi Muhammad, the father-in-law of local Taliban leader Maulana Fazalullah.

“We mourn the tragic death of Musa Khankhel and send our condolences to his family and colleagues,” said CPJ. “But grief and condolences are not enough – the government must act swiftly to bring his killers to justice and protect journalists working in this volatile region.”

Khankel’s family told PPF that it wasn’t the first time that the journalist had encountered problems with the security forces and others in Swat. Earlier that day, Khankhel and his brother Essa, also a journalist, were not permitted to cover a government press conference.

Geo TV managing director Azhar Abbas told CPJ that Geo was concerned for the safety of the rest of its staff and was pulling all but a few employees from the region while the death was investigated.

Swat Valley is located in Pakistan’s restive North-West Frontier Province, where militant groups are fighting security forces for control and where the government recently agreed to restore sharia law. Journalists frequently face violence in the area. Armed men kidnapped Royal TV Peshawar bureau chief Noorul Hasan on 8 February when he was returning from Swat. After his release three days later, he said he had been questioned about a recent interview with a Taliban chief.

The Pakistan Federal Union of Journalists (PFUJ) called for a countrywide protest on 19 February demanding the immediate arrest of the journalist’s killers and protection for journalists who “are becoming victims in the war on terror,” said a protester. According to news reports, more than 500 journalists, lawyers and activists marched in Peshawar.

IFEX members are concerned for the safety of journalists in Pakistan amid a surge in attacks allegedly by militant groups. Also last week, PPF reports that journalist and free expression advocate Imtiaz Alam was injured in an attack by a gang in Lahore, and a building that houses the Wana Press Club in the South Waziristan tribal area was flattened in a bomb blast.

This week, PPF reports that writer and newspaper owner Jan Muhammad Dashti was critically injured when gunmen opened fire on his vehicle in Quetta, Balochistan. A group claiming responsibility said it was for criticism of the prophets and Jesus in one of Dashti’s books.