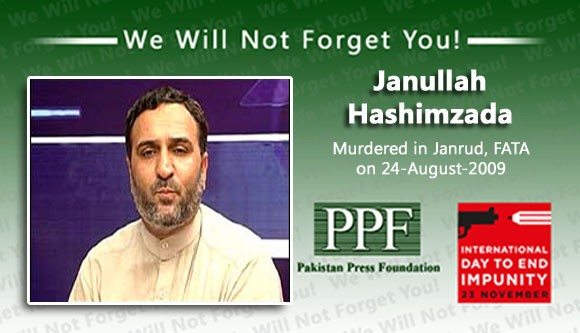 Janullah Hashimzada, the bureau chief based in Peshawar for Afghanistan’s Shamshad Television, was shot to death while travelling back from Afghanistan on a minibus near Jamrud in the northwestern Khyber district of Pakistan on 24 August, 2009.

“This was purely a targeted killing,” Shamim Shahid, president of the Peshawar Press Club.

Hashimzada worked for several Afghan and Pakistani news media, including the Afghan independent news agency Pajhwok and the Pashtun newspapers “Vahdat” and “Sahar”.

Friends said he covered sensitive issues and had been subjected to threats and pressure during the past three weeks to abandon his journalistic work and leave Peshawar.

Pakistan’s restive northwest has grown as a militant stronghold since 2001 following the U.S.-led invasion of Afghanistan. Taliban militants and security forces, warring for control of the seven tribal agencies in the semi-autonomous Federally Administered Tribal Areas, pose a threat to reporters, say CPJ and PPF.

“Journalists in the conflict zones of Pakistan and Afghanistan will remain desperately insecure unless our governments develop concrete plans for their safety and bring to justice those who murder, kidnap and injure journalists with impunity,” said Owais Aslam Ali of PPF.