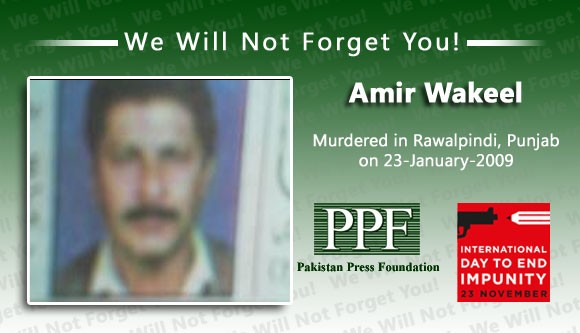 On 24 January 2009, Aamir Wakil, 40, worked for a privately-owned TV station was murdered close to his home in Rawalpindi, near Islamabad.

The press freedom organisation offers its condolences to Wakil’s family and colleagues, including his brother Kamal Asfar, who is also a journalist.

“We strongly condemn Wakil’s murder,” Reporters Without Borders said. “Although there is so far no evidence that it was linked to his work as a journalist, we call for the deployment of additional resources for the investigation and the prosecution of those responsible. Similarly, the authorities must consider new measures to protect privately-owned media after the attack on Samaa TV in Quetta.”

The press freedom organisation added: “If the climate of violence is not quickly brought under control, the government will not be able to say it is doing everything possible to ensure that Pakistani journalists can work in a free and safe environment.”

Three journalists have been killed in Pakistan since the start of the year, while seven were killed last year, making it the deadliest country in the world for the media after Iraq.

Wakil, who worked for “Awami Inqilab” (The People’s Revolution), a regional daily based in Kohat, south of Peshawar, was shot in the back, near the neck. “He was just a few metres from his home when he was killed,” his brother, Asfar, told Reporters Without Borders.

“Aamir told me two hours before he was murdered that he had received threats from unidentified persons,” Asfar said. “It was a targeted murder. I do not think the authorities did it. His killers were not government people.”

Rawalpindi-based journalists told Reporters Without Borders that Wakil was a “professional journalist” and that he had no rivals. Their comments contradicted initial claims by the police that Wakil’s murder was linked to “personal disputes.” The National Union of Journalists of Pakistan has begun its own investigation in an attempt to identify the motives.

The police officer in charge of the investigation said he had questioned a witness and was confident the killer would be arrested. The police are also investigating the murder of a young man in the same neighbourhood on the same day. The other victim was killed by two unidentified individuals who tried to take his money and mobile phone.