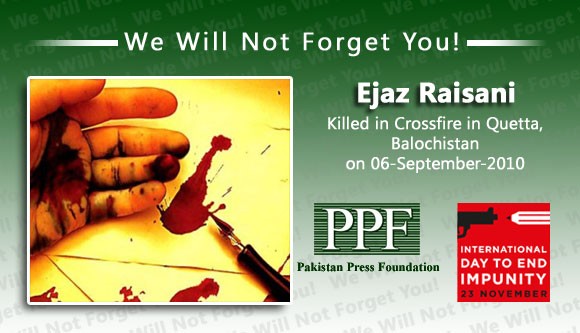 Two media staffers were killed and seven others were injured in a suicide attack on September 3, 2010 on a procession in Quetta, the capital city of Pakistan’s restive Balochistan province. At least 64 people were killed and over 160 injured in the blast. The procession was organised by the Shiite Imamia Students’ Organisation to mark Al Quds Day to express solidarity with the Palestinians.

The people participating in the procession then started firing, triggering chaos and panic. People fled or lay on the ground to avoid the gunfire. Several people, including journalists, were injured as a result of the shots.

Among those media staffers who died in the blast was Muhammad Sarwar, the driver for “Aaj News” TV channel, who was hit by the bullets and died on the spot. Aijaz Raisani, 30, a camera operator for “Samaa TV”, who was injured in the blast and also received two bullet wounds, died on September 6.

Haji Muhammad Ajmal, the vice president of the Quetta Press Club (QPC), told PPF that Tareen and Shahid Mukhtar remain in critical condition. Bugti, Mastoi, Shakir, Mengal and Imran Mukhtar, who is the brother of the critically injured Shahid Mukhtar, were discharged from the hospital after treatment.

Balochistan home secretary Akbar Hussain Durrani said that the organisers of the procession had been alerted to the threat. The provincial government has now imposed a ban on all religious processions.

Bomb disposal squad officials said the device packed 15 kilograms of explosives. The impact of the blast smashed windows of a number of shops and buildings. All shopping centres and business establishments shuttered down after an angry mob set several vehicles on fire and ransacked some shops.

The Pakistan Federal Union of Journalists (PFUJ) condemned the suicide attack on the rally. In a statement, the PFUJ said the incident had again proven that media professionals are working in hostile conditions without any security or protection, and they easily fall prey to such attacks.

The PFUJ pointed out that the media workers were not trained nor was any protective material given to them. The PFUJ urged the government to take notice of the Quetta incident and provide compensation to the family of the deceased camera operator and injured journalists.

Balochistan Governor Nawab Zulfiqar Ali Magsi and Chief Minister Nawab Muhammad Aslam Raisani, expressing concern for the people injured in the bomb blast, said the government would bear all the expenditures for the treatment of the injured media workers.