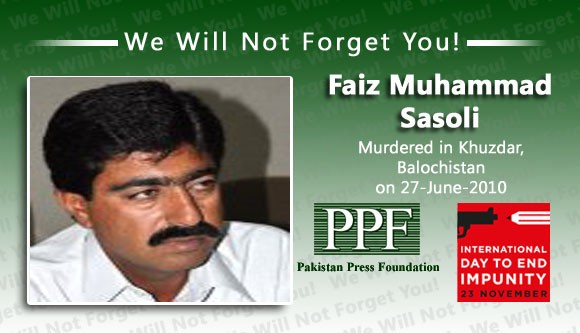 Faiz Muhammad Sasoli, a reporter based in Khuzdar District, in the southwestern province of Balochistan, was killed in a hail of submachine gun fire on 27 June 2010. Sasoli, who worked for the “Aaj Kal” daily newspaper and the Independent News of Pakistan agency, had escaped two previous murder attempts. His death brings to six the number of media workers killed since the start of the year in Pakistan, the world’s most dangerous country for the media.

“The Balochi insurgent groups that have chosen to carry out targeted murders of journalists are doing their cause a dramatic disservice,” Reporters Without Borders said. “We urge all Balochi leaders to condemn such criminal behaviour, which must stop at once. We also call on the federal and provincial authorities to investigate Sasoli’s murder.”

The press freedom organisation added: “In the space of less than two years, Balochistan has become one of the most hazardous regions in the world for journalists, who are coming under attack from both the insurgents and the security forces.”

Sasoli was killed when gunmen opened fire on the vehicle in which he was travelling with members of his family near the Faisal Hotel in Khuzdar District. A former president of the Khuzdar press club, he died on the spot.

He had often received death threats and had been the target of two previous murder attempts. A Balochi nationalist group had accused him of being one of the leaders of the Baloch Defence Armed Group, a pro-government militia that fights Balochi armed separatist groups.

Aged 27, Sasoli was due to have been married in a month’s time.

Journalists in the provincial capital of Quetta told Reporters Without Borders that the Balochistan Liberation Army (BLA) had claimed responsibility for Sasoli’s murder. At least four journalists have been killed by Balochi separatists since they resumed an armed struggle in 2006. Journalist Wasi Ahmed was killed by gunmen in Khuzdar District in April 2009.

In an unrelated incident on 12 June in Khuzdar District, reporter Munir Noor of Samaa TV and the “Daily Messenger” newspaper was beaten by members of the paramilitary Frontier Corps, who tried to stop him from covering the funerals of several Balochi students. A Frontier Corps official later apologised for the incident.