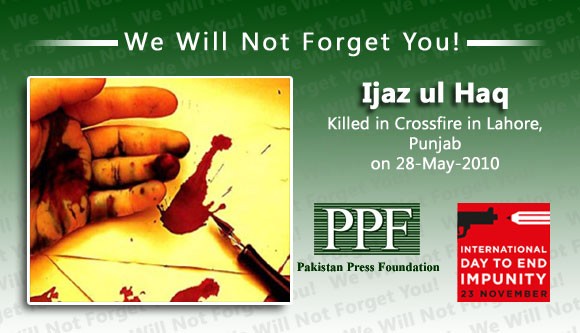 Ejazul Haq, a technician employed by Lahore-based City-42 TV, was shot dead while helping to cover attacks by “Punjab Taliban” on two mosques of the minority Ahmadi sect in Lahore, on 28 May 2010.

Reporters Without Borders offers its condolences to Haq’s colleagues and family, including his widow and two children.

At least 80 people were killed in the simultaneous attacks by gunmen and suicide bombers on the two Lahore mosques belonging to the Ahmadis, who were declared to be non-Muslims by the Pakistani authorities in the 1970s. One of the mosques was near the home of Haq, a satellite TV engineer and a member of one of City-42 TV’s mobile broadcasting units.

One of his colleagues told Reporters Without Borders that Haq rushed to the nearby mosque and was shot while giving the station a live report using his mobile phone. The station’s viewers heard the shots that killed him and his final words as he died. It is not yet known whether the shots were fired by Taliban commandos or police.

Aged 42, Haq was the fourth journalist to be killed in Pakistan since the start of this year. Three of the four journalists were killed in suicide bombings.