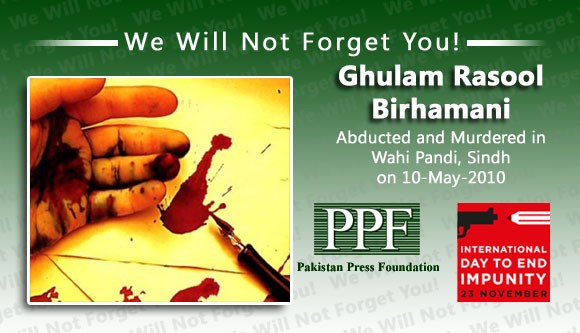 Police found the scarred body of journalist Ghulam Rasool Birhamani, 30, a reporter for the daily “Sindhu Hyderabad”, at a deserted place two kilometres from Dadu.

Dr. Mohammad Hashim Thahim, medical superintendent of Johi Taluka hospital, said that the journalist’s death was caused by fatal injuries to the head. He also found torture marks on the body.

Ghulam Bhind, president of the Dadu Press Club, told the Pakistan Press Foundation (PPF) that Ghulam Rasool Birhamani had received threats from members of the Lashari tribe some days ago after he reported on the marriage of an underage girl from the tribe.

Aman Birhamani, General Secretary of the Wahi Pandhi Press Club in Dadu district, told PPF that the deceased was reported missing on the night of 9 May and that police found his body early on the morning of 10 May. Aman Birhamani also said that press clubs and journalist organizations in Dadu district have announced a seven-day mourning period for the journalist. Journalists in Dadu also held a procession to protest the murder of their colleague and demand the immediate arrest and punishment of the killers.

The deceased leaves behind a widow, a daughter and two sons.

The Pakistan Federal Union of Journalists (PFUJ) expressed concern over the murder and demanded that the Sindh government take immediate steps to ensure that the killers are arrested.