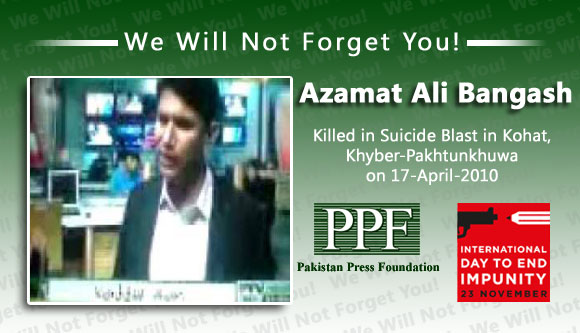 34-year-old reporter Azmat Ali Bangash was killed along with 41 other people when two suicide bombers blew themselves up amidst a crowd of displaced persons collecting relief supplies in Kohat district of province Khyber-Pakhtunkhwa. Bangash worked for Pakistan Television (PTV), Samaa TV and Associated Press of Pakistan (APP) news agency.

According to press reports, the first suicide bomber blew himself up at 11:55 a.m. while only a few minutes later the second bomber also blew himself up as people rushed to help the dead and injured. Bangash, who was at the site for coverage of food distribution, received fatal injuries and took his last breath at Kohat Development Authority (KDA) hospital. He left behind a wife and three children.

Mumtaz Bangash, President of Kohat Press Club, told PPF that according to some eyewitnesses, Bangash was hit in the second blast when he was covering the casualties of the first blast.

The District Police Officer in Kohat, Dilawar Khan, said that the 41 persons killed in the two blasts included displaced persons from Orakazai Agency and also some local people of Kohat. He said the bombers walked into the crowd camouflaged as women.

The injured were rushed to the KDA and Liaquat Memorial Hospital (LMH). Ten seriously wounded victims were moved to the Lady Reading Hospital (LRH) in Peshawar due to their precarious condition.

A militant organisation of Punjabi Taliban, Lashkar-e-Jhangvi Al-Alami, has claimed responsibility for the two consecutive suicide attacks. After the incident, a large contingent of police reached the spot and cordoned off the area for rescue work.

Rehan Khattak, a reporter at APP, told PPF that on 12 April, Bangash had told some colleagues that he had been receiving death threats from militants following the breaking news of the death of Taliban Chief Hakimullah Mehsud in a drone attack in Orakazai Agency. Khattak also said that Bangash belonged to Hangu district but due to death threats, Bangash had left his native place and settled in Peshawar and Islamabad and continued reporting from there.

Managing Director of APP, Muhammad Riaz, has expressed his heartfelt grief over the death of Bangash. A condolence meeting was held at APP Peshawar Bureau, chaired by Bureau Chief Ayaz Muhammad.

Federal Minister for Information and Broadcasting, Qamar Zaman Kaira, and Minister of State, Syed Sumsam Ali Shah Bukhari, have expressed their deep grief over the death of Bangash.

The Pakistan Federal Union of Journalists (PFUJ) has condemned Bangash’s death while performing his professional duties and urged the government to come to the rescue of journalists as the situation is getting worse. It is becoming more difficult for media persons to perform their duties without fear, the union said.