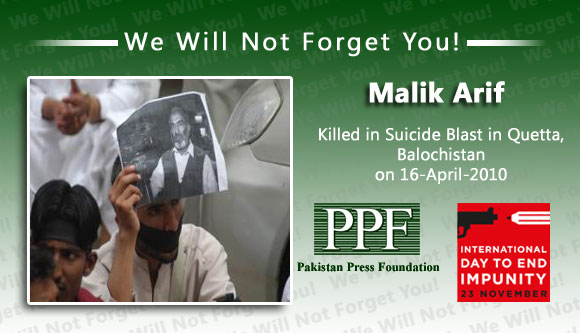 At least one Pakistani journalist was killed and others were injured in a suicide bombing at a hospital in Quetta today, according to international news reports. Details are still emerging, and some of the injured are reported to be in critical condition, but Pakistani colleagues tell CPJ that a senior Samaa TV cameraman, Malik Arif, died in the attack. Five other journalists – Noor Elahi Bugti of Samaa TV, Salman Ashraf of Geo TV, Fareed Ahmed of Dunya TV, Khalil Ahmed of Express TV, and Malik Sohail of Aaj TV – were injured.

Samaa’s senior assignment editor, Ali Kazim, confirmed Arif’s death in an e-mail message to CPJ. From Islamabad, Mazhar Abbas, deputy director of ARY One World Television, told CPJ that some of the reporters who were injured in the blast continued to report from the site live, but were clearly in pain.

“Our condolences go out to the family and colleagues of Malik Arif, as well as to those who were injured in Friday’s attack,” said Bob Dietz, CPJ’s Asia program coordinator. “Reporting in Pakistan has become increasingly dangerous as political and sectarian violence grow.”

The TV crews and other journalists were covering a Shiite demonstration after the assassination of a prominent local Shiite bank manager, who had been taken to the hospital earlier.

Local and international media reports say at least eight people were killed in the attack, with many more injured. The blast came outside the emergency ward of the Civil Hospital in Quetta, the capital of restive Balochistan province. The city is a rear-guard area for Taliban and other groups fighting in Afghanistan, but Pakistan is also seeing an increase in domestic Shiite-Sunni violence.

The official Associated Press of Pakistan news agency reported that Chief Minister Nawab Aslam Khan Raisani condemned the blast and appealed for calm. “He also ordered the police to utilize all resources for the immediate arrest of the culprits,” the agency said.