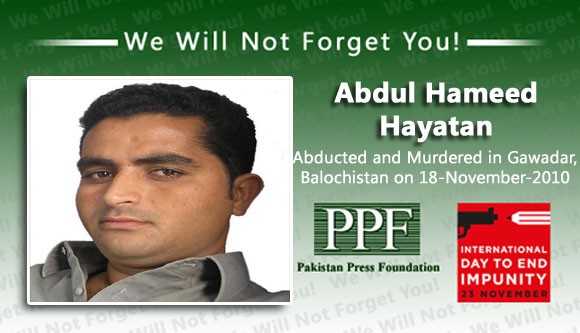 Journalist Abdul Hameed Hayatan, 26, popularly known as Lala Hameed Baloch, was abducted from the southwestern port city of Gwadar on 25 October 2010 and shot dead. Hayatan was a reporter and photographer for the “Karachi” and “Tawar” dailies and for Royal TV and the president of the Baloch National Movement (BNM), Gwadar Chapter. Hayatan’s body was found in a deserted area near the Sami river, in Turbat district, Balochistan province, on 18 November. He had been shot in the head and chest. Along with his body, a gruesome note was also found which read: “A Gift of Eid for the Balochs”.

Muhammad said the journalists’ community in Gwadar and elsewhere in Balochistan had been protesting since Hayatan’s disappearance. The Press Club has now decided to observe three days of mourning during which a black flag would be hoisted on the Press Club building. According to Muhammad, local journalists believe that Hayatan’s critical reporting on the Pakistani authorities and his support for the Baloch National Movement (BNM) were the motive for his abduction and murder.

Hayatan had played a role in establishing the Gwadar Press Club. He also avidly wrote in favour of the Baloch Armed Struggle. He faced a trial for one year for taking pictures of police officers.

According to press reports, the body of another person, mechanic Hamid Ismail, who had also been kidnapped from Turbat, was recovered at the same place. No one has claimed responsibility for the murder.

The recovery of the dead bodies of nine Baloch political workers, students and a journalist from different parts of Balochistan, within only 36 hours, has sent shock waves across the province. Enraged Balochs have observed a complete shutter down and wheel jam strike in many districts of Balochistan.

Hayatan’s brother, Abdul Haleem, himself a reporter for the daily “Intikhab”, told PPF that Hayatan was going to be married in November. Haleem said he had requested the authorities’ help in locating his brother but there was no response. Hayatan has left behind a large family of six bothers, three sisters and old parents to mourn his death.