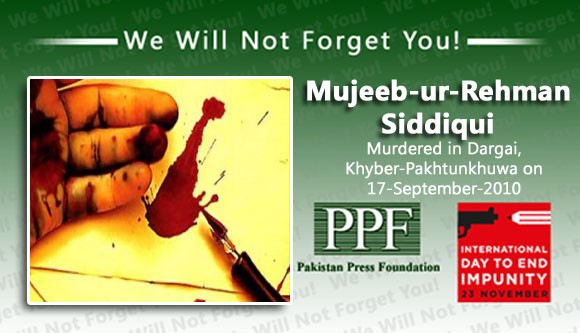 Mujeebur Rehman Saddiqui, a 39-year-old senior reporter at “Daily Pakistan” Newspaper was killed on 17 September 2010 in Khyber-Pakhtunkhwa, a northwest province of Pakistan that borders Afghanistan and is one of the world’s most dangerous locales for journalists.

Gunmen opened fire on Saddiqui and he died on the way to the hospital.

Conflict between Pakistan’s military and armed groups fighting in Afghanistan has resulted in extreme lawlessness and impunity in the northwest region. Pakistan’s central government has been criticised for failing to stop the corruption that allows groups like the Taliban to operate in the area.