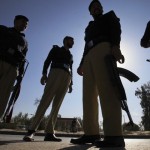 Mr Naeem was later shifted to the Lady Reading Hospital, where doctors said the journalist had a fracture of shoulder and breathing problems mainly due to excessive bleeding from nose.

The incident occurred after altercation over the removal of a barbed-wire fence.

The injured journalist said he had asked Constable Nasrullah of East Cantonment police station to remove the barbed wire from the parking area designated for media after his identity card was checked but the latter declined.

“My only sin, which led to my torture, was that I asked the cop that if it’s not his duty to let journalists park cars at the designated place, then why he was checking their identity cards,” he said.

Mr Naeem claimed the constable also tried in vain to fire gunshots at him as journalist Adeel Saeed standing nearby snatched his official rifle.

When contacted, SSP (Operations), Peshawar Najeebur Rehman said he had suspended the policeman and ordered a departmental probe into the incident.

“We have also initiated a departmental inquiry into the matter. Action against the constable will depend on the medico-legal report of the case,” he said.

Meanwhile, Speaker of the provincial assembly Asad Qaisar announced to form of committee to look into the incident.

The committee comprising Information Minister Shah Farman, Zakat and Ushr Minister Habibur Rehman, and opposition MPAs Miraj Hamayun, Sardar Aurangzeb Nalota and Syed Jaffar Shah will meet on Monday to examine the CCTV footage of the incident and record statements of the relevant people before submitting a report to the speaker for necessary action.

Later in the day, journalists went to Lady Reading Hospital in large numbers to inquire after Mr Naeem.

They also held an informal meeting at the hospital and condemned the constable’s conduct and demanded strict action against him.

They decided to hold a joint emergency meeting of KhUJ and PPC general bodies at the press club today (Saturday) to decide future course of action.