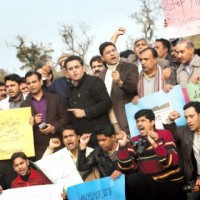 ISLAMABAD: A large number of journalists held a protest demonstration here on Saturday to condemn the killings of three Express News staffers.

In a tragic incident in Karachi late on Friday evening, three employees including a driver Khalid, technician Waqas and guard Ashraf were shot dead by unidentified assailants.

The protesting journalists emphasised the ned for journalists to stand united in this testing time, irrespective of their professional affiliations.

While holding placards inscribed with slogans such as “stop killing journalists”, the journalists shouted slogans against the government for failing to protect and provide security to members of the media.

NPC President Sheharyar Khan, who is also an Express News reporter, pointed out that police protection outside the press club had actually decreased since the incident, and demanded that the government ensure that every journalist, no matter whom his employer, be assured of a safe working environment.

Senior journalist Rana Jawad said the attack was not on a specific media group but on the whole journalistic community.

“It is one organisation today, it could be another tomorrow,” said senior journalist and anchor Hamid Mir.

He said that the government was well aware of the groups and agencies involved in such attacks.
Secretary RIUJ Bilal Dar said that Pakistan has become the third-most dangerous country in the world for journalists.

Dar said that journalist community must stand united irrespective of whichever organisation they are affiliated with and continue working with the same passion. “By seeing the number of cameras today, we can all be assured that the press stands united,” said former PFUJ senior vice president Fauzia Shahid.

Separately, rights activist Tahira Abdullah demanded “that the government provided adequate security and protection to the media, across the country”.

“If the media stops reporting today, the public will not be able to get their grievances across,” she said.
While speaking to The Express Tribune, Abdullah said such incidents were occurring far too frequently and the government should provide adequate protection to those working in the media.