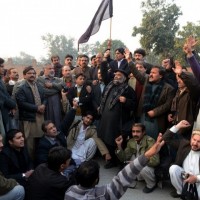 PESHAWAR: Protests were held across the region on Saturday against the deadly attack on a team of Express Media Group’s employees, which resulted in the death of three people on Friday in Karachi.
Media representative bodies, Peshawar Press Club (PPC) and Khyber Union of Journalists (KhUJ), held a general body meeting at the press club and asked the Sindh government to promptly arrest the culprits.

It was also decided in the meeting that January 30 would be observed as a Black Day against the attack on media personnel.

Later, journalists protested outside the PPC and expressed anger over the growing safety risks for media personnel and hindrance in their professional activities.

Umar Faraz Khan criticised the Sindh government for its failure to protect journalists saying this is the third time the Express Media Group has come under attack. The protesters paid tribute to the deceased staffers and offered fateha for them.

Adviser to the Prime Minister, Amir Muqam, also expressed concern over Friday’s incident, terming it an attack of the freedom of the press.

Representatives of the Journalists Association took out the rally from Palm Beach Hotel to the office of Rescue 15 in DI Khan.

The association’s president Ahmad Nawaz Mughal led the rally while a large number of social and political figures participated. The protesters termed the incident ‘sorrowful’ and said the government had failed to provide protection to journalists.

Protests were also held in Parachinar and Upper Dir and practical steps for the security of media persons were demanded. Meanwhile, the members of Gilgit Press Club and Gilgit-Baltistan Union of journalists held a protest rally from Madina market to Ittehad Chowk in Gilgit town.