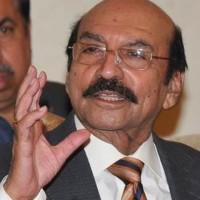 KARACHI: Sindh Chief Minister Syed Qaim Ali Shah on Sunday appointed DIG Traffic Dr Ameer Shaikh to investigate the incident in which journalists had been manhandled by police outside the Sindh High Court building on Saturday and submit a report to him in a week.

The decision was taken during a meeting the chief minister held with reporters and cameramen of private TV channels who had been thrashed by police outside the SHC building where they had gathered to cover the appearance of PPP’s estranged leader Dr Zulfiqar Mirza before a court.

The media personnel told the chief minister that they had been manhandled by masked commandos of the Special Security Unit of Sindh Police who were not in uniform.

They requested the chief minister to order an inquiry into the incident and bring those involved to book.

Mr Shah assured the journalists that no such incident would take place in future. “I have already directed the IG to provide protection to journalists when they cover high-profile events,” he said.

“Journalists are my brothers and they have always supported our elected government(s). We will not allow police to harass them,” he said.

Meanwhile, demonstrations were held in some cities of Sindh on Sunday to condemn police action against journalists.