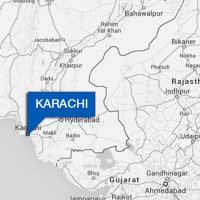 KARACHI: Special Security Unit (SSU) of the police beat up journalists, reporters, photographers and cameramen when they were performing their professional duty outside the Sindh High Court (SHC) here on Saturday.

The media personnel were covering appearance of former home minister Sindh Dr Zulfiqar Mirza at SHC for his bail application when they were subjected to violence. Police used wooden staffs to beat them up and also damaged their equipments.

Pakistan Federal Union of Journalists (PFUJ) President Rana Azeem and Secretary-General Mohammad Amin Yousuf condemned the police attitude and demanded of the Chief Minister to order an inquiry into the matter.

On this occasion, PFUJ Secretary-General Amin Yousuf who reached there talked to Sindh Information Minister Mr Sharjeel Inam Memon, the PPP leadership and higher police officials and informed them of police brutality.

Later, Sindh Information Minister assured Mr Amin Yousuf that he had ordered an inquiry into the matter, and said that no one would be allowed to stop journalists from performing their professional duties.