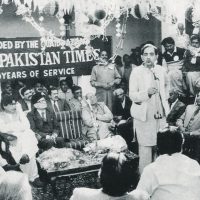 Mazhar Ali Khan recounts events of that fateful day in April 1959 when Pakistan’s press suffered its most grievous blow.

WHEN the people of our land attain full freedom and genuine democracy, and Pakistan’s history is written by honest scholars searching for the truth, and not as a panegyric on, or apologia for, the ruler of the day, the Ayub regime will be found guilty of a long and varied list of heinous acts. It will not be easy for our future historians to determine which single action of the self appointed president and his government of courtiers did the greatest harm to the national interest, for they will have a wide field to survey.

Many will probably conclude that the dictatorship’s gravest crime was its deliberate destruction of Press freedom, because so many other evils flowed from this act of denying to the people of Pakistan one of their fundamental rights. It is, therefore, pertinent to recall the Ayub regime’s first step towards this fascist aim, namely, its attack on Progressive Papers, an institution created under the patronage of the Quaid i Azam.

The dastardly attack was made at dawn on Saturday, April 18, 1959. Two ministers, one a general, masterminded the operations, with their main headquarters at the residence of the Martial Law Administrator of Zone B, and a tactical headquarters at Lahore’s Gymkhana Club.

By midnight the offices of the Progressive Papers – The Pakistan Times, Imroze, and the weekly Lail o Nahar – were surrounded by an array of armed police and CID men, and they were captured as the night shift left the premises.

At the same time, similar detachments besieged the residences of Mian Iftikharuddin, the company’s chairman, who also owned a majority of its shares, and its managing director, Syed Amir Hussain Shah. The police carried search warrants and were authorised to use “reasonable force” to take possession of all documents connected with Progressive Papers.

For some weeks before the event, we had heard rumours that the government was unhappy with The Pakistan Times because it was not giving the regime full support, and, more recently, sympathetic individuals connected with the government had discreetly whispered the warning that ‘something terrible’ would happen to our papers.

We were naive enough to believe that any action contemplated would be legal action of some sort. Our naivety was rudely shattered, and we learnt the lesson that a usurper’s regime, guided by unprincipled and lying toadies, was capable of illegal and unscrupulous action to gain its own ends.

The last warning received by me before the event was at 1.30am, when a friend woke me up to say that he had heard from a minister at the Gymkhana Club that he would be coming to see me at 5am to discuss “the future of The Pakistan Times”. At about 5.30am, the threatened ministerial visitation, which by morning I had begun to discount, materialised. He told me in plain terms that the government had taken over The Pakistan Times. In reply to the protest that this could not be done as there was no law which allowed such action, he said that it “had already been done” and that the Security Act had been amended two days ago to make it possible.

Cutting short the discussion on law and ethics, he said he had come to explain that the government’s only purpose was to oust Mian Iftikharuddin and to change the management. No other change was intended, and, in fact, “better facilities” for work would be made available to the editorial staff. The confused and confusing discussion ended when I said that I would give my decision by the afternoon.

About noon I reached the office, and saw that the takeover was indeed complete. Armed police, with handcuffs dangling from their belts, stood at the gates, and CID men were all over the place. When I tried to open the door to my room, I was stopped by a policeman guarding the sanctum. The managing director’s office was occupied by Mr Mohammad Sarfaraz, the newly appointed administrator, and only at his intervention was I allowed to enter my room.

Sarfaraz gave me the details of the government’s monstrous action, and I saw the relevant orders and notifications which had been issued, clearly showing that the coup was a well planned conspiracy. I also saw a copy of ‘The New Leaf’, the editorial which appeared in the next day’s issues of The Pakistan Times and Imroze. Reputedly the work of Qudratullah Shahab, the then information secretary, it is the stupidest piece of bad writing that has ever disgraced the columns of these journals.

I called an informal meeting of the other editors and senior colleagues, and told them that I had decided to resign immediately.

Later in the afternoon, after informing Mian Iftikharuddin, I went to General Rana’s residence. There I was confronted by a minister and a group of senior officials, including Shahab and Sarfaraz. On being told that I had decided to leave The Pakistan Times, they sought to persuade me to change my mind.

When it was realised that my refusal was final, an official pointed out that the Essential Services Ordinance had been invoked, and that I could not resign. I said it would be a novel experiment to compel an editor to continue to work against his will, and if they so desired they could try it. At this the minister said that the ordinance would not be applied to me, and that if I insisted, my resignation would be accepted. Requesting that my name should be removed from the printline, I left the gathering.

During this period, the real story behind the takeover began to unfold. Once the decision had been taken to take over Progressive Papers, the case against them began to be built up. The so called political charges are reported to have been prepared by the director of the Intelligence Bureau, assisted by a brigadier who at that time was grooming himself to become the Goebbels of the regime.

Other Government departments were instructed to dig up anything they could find against the company and its newspapers. This process reportedly went on for many months.

That the charges were utterly false is proved by the fact that, although the company’s files were scrutinised by a team of sleuths for nearly three years, not an iota of evidence was discovered to substantiate any charge or even to pinpoint a serious irregularity.

Since it is plain that the charges against Progressive Papers were fabricated, and would have been thrown out of court even by a third class magistrate gifted with a modicum of honesty and elementary knowledge of legal procedures, the Ayub government’s action, and the kangaroo court which authenticated it, can only be viewed as a medieval auto da-fe, because the only complaint which had validity was that those who owned, managed and guided The Pakistan Times and its sister papers did not share the regime’s faith in its dictatorship, and for this lack of faith they were punished.