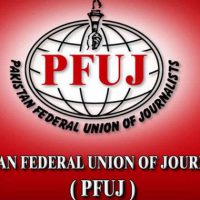 ISLAMABAD: The Pakistan Federal Union of Journalists (PFUJ) has expressed deep concern over the ever-increasing danger of attacks on working journalists in Balochistan by extremists and religious bigots.

According to a press release, PFUJ President Afzal Butt and Secretary-General Ayub Jan Sarhandi said in a statement Thursday that it had become extremely difficult for journalists in Balochistan to perform their professional duties.

“A number of newspapers in the province have closed down. Newspaper offices are being attacked regularly. More than 18 press clubs have been locked up. Journalists are performing their duties under grave threats from different groups and no security is being provided,” the union office-bearers said.

“We are of the view that such unannounced restrictions on journalists in Balochistan have inflicted immense loss on the freedom of the press. The number of journalists who laid down their lives in the line of duty is the highest in Balochistan. The most regrettable part is that no murderer has so far been arrested nor investigations, in any case, proved fruitful,” Butt said.

Sarhandi said that PFUJ believes the government has failed to protect journalists and they have been left alone and unguarded in Balochistan. “If the state itself is unable to provide protection to journalists, we have nowhere to go. The situation is unacceptable for PFUJ.”

The PFUJ said the government must wake up and take immediate notice of the situation in Balochistan and provide security to journalists. If this goes unnoticed, PFUJ will not hesitate to take the extreme step.

A high-level meeting of PFUJ will take stock of the situation and mull over next line of action. An announcement in this regard will be made soon, the statement said.