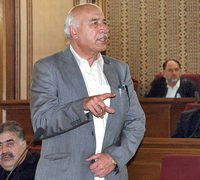 ISLAMABAD: Dr Abdul Malik Baloch, a former chief minister of Balochistan and leader of the National Party, on Wednesday expressed concern over forced closure of several press clubs in the province and stoppage of newspaper distribution in Gwadar, Turbat, Khuzdar and some other areas.

The distribution of newspapers in southern and central Baloch­istan has remained suspended since Oct 25 after a deadline given by militant organisations to owners of media houses for “adequate coverage” of their statements expired the previous day.

After the expiry of the deadline, the militants forcibly shut down several press clubs and warned hawkers of consequences if they continued distribution of newspapers.

Speaking at a demonstration organised by the Rawalpindi-Islamabad Union of Journalists (RIUJ) outside the National Press Club on Wednesday, the National Party leader condemned the forced closure of press clubs and stoppage of newspaper distribution. He asked the government to take measures for resolving the situation.

“There have been attacks on the media in the past too in Balochistan, but this fresh wave of attacks is alarming,” Dr Malik said.

He asked the provincial government to adopt a “proactive policy” for removing differences between militant groups and newspaper owners.

The RIUJ’s president and the secretary general also spoke on the occasion.

The two leaders said closure of 15 press clubs was not conveying a positive image to local and international investors about Balochistan.

The RIUJ said if the federal government did not take immediate steps to normalise the situation, journalists would hold protests in front of the Parliament House.

Tikka Khan, a leader of the hawkers’ association, slammed the provincial and federal governments, saying the situation had placed not only hawkers’ lives at risk but also their livelihood.

He called upon the government to take steps for hawkers’ safety.

Press clubs in Mastung, Kalat, Turbat, Panjgur, Gwadar, Pasni, Ormara, Awaran, Nushki, Dalbandin, Kharan and Hub have remained closed for the past 15 days because of the threat by militants.

Newspapers are being distributed only in Pakhtun areas of Balochistan.