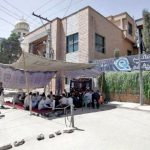 QUETTA: Razaur Rehman and Zafar Baloch were elected president and general secretary of the Quetta Press Club (QPC) respectively in the election for the year 2019-20 held here on Saturday.

Moreover, Chief Minister Jam Kamal has extended his felicitations and greetings to the newly-elected members of the Quetta Press Club. In a message, the chief minister expressed the hope that the new cabinet would play an active role in addressing issues related to the journalist community.

“The Government of Balochistan has already increased the total grant for the Quetta Press Club and we will utilise all available resources to address the issues related to journalists in the province,” Kamal pledged, adding that a residential colony would be finalised in the coming days.

He expressed his optimism that the new QPC cabinet would continue highlighting the basic issues of Balochistan and guiding the provincial government.