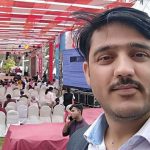 KARACHI: A reporter associated with the daily Jang, Karachi, was forcibly taken away by unidentified armed men from his home early on Saturday morning, according to his family.

Around two dozen masked armed men entered the house in Salman Farsi Society, within the jurisdiction of the Al-Falah police station, by scaling a wall at around 4am and took Matloob Hussain Mosavi with them, said his brother Minhaj Mosavi.

The brother said the intruders misbehaved with his family members and locked them in a room before taking Matloob away.

Quoting his neighbours, Minhaj said the armed men in plain clothes came in five vehicles, three of which belonged to the police.

The brother said Matloob, father of a five-month-old baby girl, had no affiliation with any political or religious organisation. However, he added, his brother was a liberal and progressive person and a social activist.

He said if there was any allegation or case against Matloob, he should be produced before a court of law so that “anxiety of the family could be reduced”, adding an application had been submitted in the Al-Falah police station in this regard.

DIG East Amir Farooqi confirmed that the reporter’s family had submitted an application to the police.

He said the family in the application had claimed that policemen were among those who had taken him away. The police were trying to know the whereabouts of the reporter and they had contacted various agencies in this regard, he added.

Meanwhile, the Karachi Union of Journalists (KUJ) has condemned the incident.

The Nation: Journalist whisked away by armed men

Business Recorder: Journalist picked up by armed men from his house