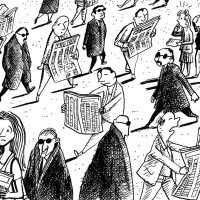 A few days ago my nine-year-old son and I had a conversation on our way back home from his swimming practice. He said that earlier in the day his teacher had asked him and his peers to write about their life goals. He wrote that one of his life goals was to become an Olympic swimmer. “But our teacher said we should only write about educational goals like getting better at math and stuff…” He added quickly. I told him his life goal will stay the same no matter what he writes in the class, to which he replied, “Okay, but then where is my freedom of expression?”

Since that evening, I have been thinking about how it is that my nine-year-old son is so sensitive about his freedom of expression and more importantly why I am not. Part of the reason could be that he is growing up in America, where freedom of expression is considered an inalienable right of an individual and is protected by the constitution.

But unlike my son, I grew up in Pakistan where one’s freedom of expression is not only unprotected by the constitution but is also limited by various social and cultural norms, religious injunctions, and political contingencies. I don’t have any memories whatsoever of my parents or teachers or senior colleagues ever telling me anything about freedom of expression.

According to the First Amendment to the constitution of the United States, “Congress shall make no law respecting an establishment of religion, or prohibiting the free exercise thereof; or abridging the freedom of speech, or of the press; or the right of the people peaceably to assemble, and to petition the Government for a redress of grievances.”

Article 19 of the constitution of Pakistan states, “Every citizen shall have the right to freedom of speech and expression, and there shall be freedom of the press, subject to any reasonable restrictions imposed by law in the interest of the glory of Islam or the integrity, security or defence of Pakistan or any part thereof, friendly relations with foreign States, public order, decency or morality, or in relation to contempt of court, commission of or incitement to an offence.”

What are these “reasonable restrictions” that Article 19 mentions and who decides that a certain restriction is reasonable? More importantly, what does the word “reasonable” mean in the text of Article 19? Which reserve of reason one must consult to arrive at the reasonableness required to impose “reasonable restrictions” on someone’s freedom of speech? Put simply, what is the source of this “reason”? The constitution does not specify if this “reason” is located in social norms, cultural practices, religious beliefs, or rational thinking?

Article 19 then moves on to forbid any expression that is against “the interest of the glory of Islam.” Which Islam, one might ask, does the constitution refer to? Is it the “scriptural Islam” i.e. the Islam of the Quran and the Hadith? Or is it the “interpretative Islam” i.e. Islam the way it has been interpreted by countless theologians and jurists since the 8th century? Or is it the “lived Islam” i.e. Islam the way it is practiced by Muslims in everyday life all over the world?

The “interpretative Islam” is an immense textual archive with various — sometimes, and more importantly, conflicting — interpretations of the Quran and the Hadith. Over time these diverse interpretations led to the establishment of various Islamic sects and subsects and, unsurprisingly, led to sectarian violence. The discrepancy between “scriptural Islam” and “lived Islam” can be illustrated with the help of the long tradition of wine drinking throughout Islamic history.

Article 19 also forbids any expression that jeopardises Pakistan’s “friendly relations with foreign States.” The crucial word in this phrase is “friendly”. How does one understand what constitutes “friendly relations” with a foreign state? What makes a country a “friend” of another?

For example, China is America’s largest trading partner and in 2017 the total volume of US-China (two-way) trade was more than $635 billion. Does this mean China and America are friends?

In addition to Pakistan’s embassy in Washington DC, there are five Pakistani consulates in the US. Similarly, the US has consulates in Lahore, Karachi, and Peshawar, in addition to the American embassy in Islamabad. There is also a sizeable Pakistani community living and working in the US. The US Department of State has declared that the teaching and learning of Urdu is “critical to our national security and prosperity” and offers scholarships to American students who want to learn Urdu. Does this mean Pakistan has friendly relations with America?

Israel supported Pakistan both ideologically and materially during the Soviet-Afghan war and while there have been no conflicts between the two countries, the mere mention of the name “Israel” elicits an unconditional hatred from the Pakistani public.

Similarly, what does the constitution mean by words like “integrity,” “security,” “public order,” “decency,” and “morality?” The categories like “reasonable restrictions,” “glory of Islam,” “friendly relations with foreign states,” “integrity,” “security,” “public order,” and “morality” are nothing more than vacuous signifiers and the state can deploy them to mean whatever it wants them to.

The way Article 19 is worded does not show that the state wants to ensure the freedom of expression for the Pakistani public. Instead, it appears as if these words are strategically chosen to give the state maximum leverage to restrict freedom of expression in whatever “reasonable” way it deems fit. These arbitrary “reasonable restrictions” create a deep sense of insecurity in the public because one is never sure what the state might deem “reasonable” in any particular instance.

During the 1970s oil embargo imposed by the Organisation of Arab Petroleum Exporting Countries (OPEC), Valéry Giscard d’Estaing, the French president at the time, remarked, “They [the OPEC countries] have oil, but we have ideas.” But Pakistan does not have any oil and unfortunately the state does not seem terribly interested in promoting free exchange of ideas either.

Free exchange of ideas is essential for the production of new knowledge, which in turn leads to greater economic prosperity. It is not a coincidence that most economically prosperous and industrially advanced countries protect and guarantee freedom of expression. It is impossible to become an economically prosperous country without first ensuring freedom of expression.

The severe lack of academic freedom in Pakistan is perhaps the biggest disservice done by these constitutionally instituted “reasonable restrictions”. Over the years, state censorship has significantly contributed to a massive brain drain from the country to an extent that the most important and relevant scholarship on Pakistan is being produced in universities outside of Pakistan. Most of the scholarship that is being produced in Pakistani universities often does not meet established academic standards and thus remains completely irrelevant to ongoing debates.

A couple of years ago, a leading academic publisher in Pakistan rejected my collection of interviews with Pakistani English-language novelists just because the book contained references to the work of a ‘banned writer’. Ironically, when the book was eventually published by an Indian publishing house, well-meaning friends and colleagues asked me why I did not publish my book with a Pakistani publisher.

After coming into power, Prime Minister Imran Khan announced that the Prime Minister’s House would be converted into a world-class university. While the prime minister’s initiative is laudable, it is important to keep in mind that Pakistan can never have a world-class university without first ensuring freedom of expression. Fancy buildings are of no use if scholars and intellectuals are not allowed to engage in free exchange of ideas.

Instead of investing time and effort and money in establishing new universities, a more cost-effective route to greater knowledge production would be to ensure freedom of expression to already existing educational institutions.

A couple of years ago when I applied for a premature retirement from the navy to pursue a doctorate in comparative literature at an American university, a number of friends and colleagues suggested that I should wait for another ten years to qualify for a house that naval officers are offered at subsidised rates at the time of their retirement. They thought it was foolish of me to forgo an opportunity to obtain prime real estate. Had I stayed another ten years in the navy, I might have gotten a house at a prime location, but my son would have grown up without knowing what freedom of expression is.