Home » Featured » Bilawal wants parliament to give judiciary a fight 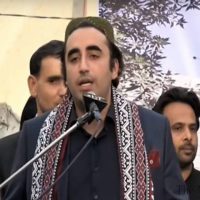 Karachi – Pakistan People’s Party Chairman Bilawal Bhutto Zardari on Saturday called for ‘empowerment of Parliament’ to reverse the ‘erosion of power’ of this supreme constitutional pillar of the state.

“Parliamentary activism is needed in the presence of judicial activism,” he said, asserting that this prime democratic institution was under attack for quite some time.

“When other institutions of the country could empower them then why not the parliament?” he asked, during his maiden visit to Karachi Press Club along with Sindh Chief Minister Murad Ali Shah and others.

The PPP chairman lavished praise on media and invited it to join hands with them in the cause of strengthening the parliament.

He offered his party’s support in media’s struggle for ‘freedom of expression’ – quite apparently as a favour in exchange, though he did not say so explicitly.

The bait appears to be quite enticing giving that the media, particularly its associated interest groups, are facing a major threat to their power as the PTI-led government is seeking to clip the wings through a new and more powerful all-encompassing media regulator.

At the Karachi Press Club Bilawal and his companions were welcomed by the newly elected governing body of the club and its president.

The PPP leader handed over a cheque of Rs15 million to the club office bearers on behalf of the Sindh government and he was given a lifetime membership certificate of the club.

Addressing meet-the-press event, Bilawal said that only peoples’ representatives should have the right to decide for masses and they would not allow anyone to degrade the parliament.

Since last one year the parliament has left many gaps for others to fill in and therefore it was needed the issue is debated on the floor for empowerment of the parliament, he said.

“The lawmakers and the democratic forces have to decide now that none other than the parliament will decide the matters relating to the country,” he said, and added that the incumbent prime minister needs to understand this the most.

Reiterating his commitment to the 18th Constitutional Amendment, the PPP leader said that the amendment is under attack from all sides but his party would not bow down to the attackers and if needed, would come out on roads and take out a long march for its safeguard.

“The 18th amendment was approved after consultation of all political stakeholders and covered all fault lines of the country,” he said. They would go to every extent and take every route to safeguard it despite the adverse remarks from some federal ministers, he added.

Highlighting the provincial government’s efforts for improving conditions at Sindh health institutions including NICVD, he said they would go in review over apex court decision of the handover of these institutions to federal government.

Raising questions over court orders about the provincial autonomy, he asked as to why the apex court termed law and order responsibility of the provincial government in a short order but later changed the position by declaring it a federal subject in the detailed order. He called for unveiling reasons behind such ambiguous and suspicious court decisions.

Applauding the role of press clubs in strengthening of democracy in the country, Bilawal said that Karachi Press Club has a leading role in this process and no democratic movement would have succeeded in absence of these platforms.

He announced to make press clubs epicentre of his politics and said he would visit all press clubs across the country to expedite the ‘movement for freedom of speech’.

He however said that his party would welcome criticism from the media on different issues as it would strengthen them.

“Benazir Bhutto [always] welcomed the media criticism and we will also appreciate media if it highlights as to how our chief minister and other government functionaries could improve their performance,” he said.

Terming government attitude over economy non-serious, he said that the incumbent government despite having over 200 economy experts have taken u-turns and presented third mini-budget. “What is reason of presenting third mini budget and then running away from debate on it on the floor of the house,” he asked.

The PPP leader said that even this new finance bill has failed to resolve issues faced by the poor of the country and it was only aimed at benefitting the elite and the rich. “It has only given relief to Aleema Khan and Jahangir Tareen while the farmers, labourers and youth have nothing for them in it,” he said.

Speaking on anti-encroachment drive in the Karachi, Bilawal said that they would go into review over the apex court decision and would work on future master plan of the city rather than implementing 1950’s master plan. “We need time to either resettle the people concerned or regularise their encroachments,” he said.

Responding to a query over missing persons, the PPP chairman said that such incidents should be stopped and all those gone missing should be recovered.

He also supported the Afghan led and Afghan owned solution of Afghanistan but opposed to accept any such force that does not accept the constitution and status of Pakistan.

To a query about his marriage, Bilawal in a lighter mode said that meetings were underway for the purpose and it would be determined whether the marriage would be helpful in election process.

“Consultations are underway whether to carry out four marriages, one in each province, and their likely impact on polls,” he said.