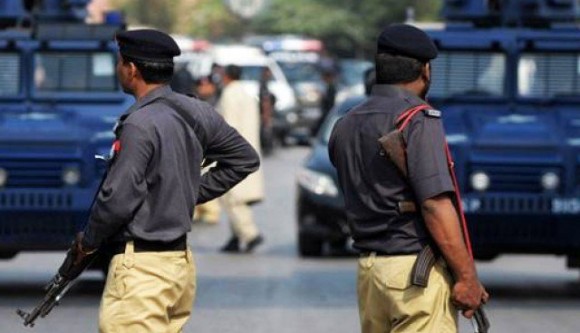 KARACHI: Two policemen were suspended on Saturday for manhandling a journalist while he was covering a police encounter in Gulshan-e-Iqbal.
Sajid Rauf, an Express News reporter, was manhandled by policemen of the Sharae Faisal police station near Lal Flats on main Rashid Minhas Road.

“After hearing gunshots, I reached the spot and saw two robbers lying on the road after they had been shot by the police,” said Rauf. “I took out my mobile phone and started filming the scene when suddenly an official snatched my phone from me.” Rauf said that he told the officials that he was a journalist yet they abused and beat him. The policemen then took Rauf to Sharae Faisal police station where they also manhandled him. District East SSP Irfan Baloch took notice of the incident and suspended the policemen including ASI Amjad.
Home Minister Sohail Anwar Siyal sought a report from the Zone East Police Chief DIG Arif Hanif within 24 hours. Siyal also ordered the department to conduct an inquiry and take action against the policemen responsible.

The two robbers that had been injured during the encounter had looted a family on Rashid Minhas Road. Sharae Faisal SHO Sarwar Commando said that they had snatched a mobile phone from a boy and were later caught looting family. “The robbers, instead of surrendering, opened fire at the police and attempted to escape,” the officer explained. “In retaliation, the police also fired back and arrested both the robbers in injured condition.” The police also claim to have recovered arms, a motorcycle and looted valuables from their possession. The suspects were later shifted to Jinnah Postgraduate Medical Centre where they succumbed to their injuries.