Home » Featured » Asma Jahangir lashes out at the powers that be 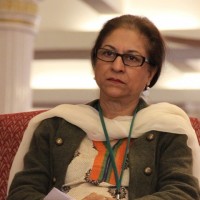 ISLAMABAD: Outspoken human rights activist Asma Jahangir on Thursday criticised military involvement in politics and the judiciary’s role over the years, wondering why only politicians were held accountable in Pakistan.

Addressing a ‘Meet the Press’ event at the National Press Club, the senior lawyer sarcastically observed that the law on freedom of expression allowed individuals to speak against politicians and their family members, but did not permit criticism of the army or any other country.

“If the army gets itself involved in politics, fingers will be raised. We will continue to stand against their weapons with pens in our hands and we will not stop raising our voice for the rights of people,” she stressed.

Recalling that the defence budget could not be discussed in parliament, Ms Jahangir noted that the armed forces should stop taking taxpayer money if they were unwilling to disclose this information.

Talking about the recently announced judgement that disqualified Nawaz Sharif, she called for the right of appeal to be given in cases of fundamental rights i.e. those heard under Article 184(3) of the Constitution.