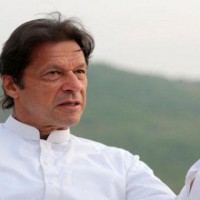 ISLAMABAD: Pakistan Tehreek-e-Insaf (PTI) Chairman Imran Khan has requested the apex court to announce its verdict in the Panamgate case “as early as possible, so that Pakistan can march forward”.

The Supreme Court, after concluding hearings in the Panamagate case, reserved its judgement last week. A date for the judgement has yet to be announced.

“The prevailing stalemate on the economic and law and order fronts has been adversely impacting Pakistan. The country is at a standstill because of the pending decision,” Imran said, requesting the Supreme Court to steer Pakistan out of the current situation by announcing its much-awaited verdict at the earliest.

Addressing a news conference at his Bani Gala residence, the PTI chief also requested the whole nation in general and his party activists in particular to boycott Jang/Geo Group for the dirty role the media house had been playing in the current political scenario.

Imran said he could comprehend how challenging the Panamagate case was for the judges of the apex court.

“If they [the Sharif family] can offer me Rs10 billion to keep mum on their corruption, I can imagine the pressure that would have been exerted on the honourable judges by this mafia,” he said.

The PTI chief said he knew it was a difficult and lengthy case but the nation was on tenterhooks because of the current political stalemate.

He strongly criticised Prime Minister Nawaz Sharif, who is currently on a state visit to the Maldives, saying at a time when the country had been facing severe challenges — not only on the internal front but also on the external front — the prime minister was on a foreign trip.

He alleged that the prime minister was visiting the Maldives ‘on his own request’.

“We have knowledge of some recent developments where some countries cancelled the PM’s invitation(s) after exchanging official notes to visit their respective countries due to the fact that Sharif has been facing criminal investigations back in Pakistan,” Imran said.

The poor nation’s money was being used to buy loyalties in Pakistan, he said. “They are trying to portray on television that instead of producing their defence Imran and others are also corrupt in Pakistan.”

“I will ask my party activists and countrymen to boycott the Gang/Geo Group in a bid to teach him [Mir Shakil] a lesson that the nation cannot be fooled anymore,” Imran told a news conference.

The PTI chairman said Mir Shakil had used derogatory language against the honourable judges of the apex court. “We know from where he is drawing such courage,” Imran said.

“He is using his media house to save the biggest Godfather of the nation. Media works for the protection of democracy and to ensure transparency. Both [the Sharif family and Mir Shakil] are hands in gloves in looting public money,” Imran said.

The PTI chief said through some paid journalists the media group was trying to equate Sharif’s corruption case with his financial affairs. “Paid journalists are trying to draw parallels between two entirely different things,” he said. “How can you compare an all-time best all-rounder of the world with a corrupt politician?”

He said Mir Shakil’s media house had been deceiving people considering them fools. “Has anyone ever heard of a premier of some country who at the same time was an employee of some other state?”

He said the Sharif mafia was a criminal enterprise and the Jang/Geo Group had been protecting those criminals.