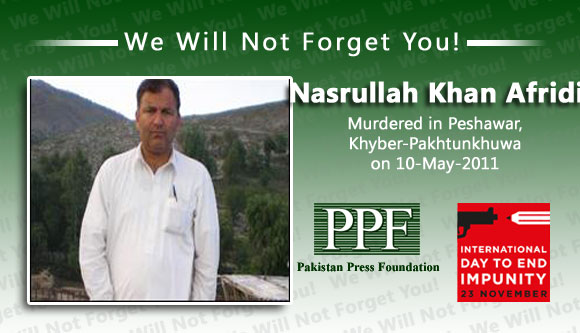 Nasrullah Khan Afridi, 38, a correspondent for state-run Pakistan Television Corporation (PTV), the English-language daily “Statesman” and the Urdu-language daily “Mashriq” in Khyber tribal agency, was killed when an explosive device ripped through his vehicle on the night of May 10, 2011 in Peshawar, the capital of Khyber Pakhtunkhwa province of Pakistan that borders Afghanistan.

The explosion occurred when Afridi came out of the offices of the Tribal Union of Journalists (TUJ), where he was a regular visitor, and entered his car. The device exploded, leaving behind a completely gutted vehicle and a crater in the road. The body of the deceased was burnt beyond recognition. A few other vehicles were damaged and windowpanes of nearby buildings were smashed. No one has claimed responsibility for the killing.

Mian Iftikhar Hussain, minister of information of Khyber Pakhtunkhwa province, said this was a case of a targeted attack and that militants have been killing journalists. He said that the authorities’ war against militancy would continue and it was their resolve to eliminate militants as they were killing innocent citizens.

Afridi had transferred from Khyber Agency to Hayatabad town in Peshawar along with his family a few years ago after receiving threats by a leader of the Lashkar-e-Islam (LeI), a Bara-based militant organisation. On May 26, 2007 unidentified persons lobbed two hand grenades at Afridi’s house, damaging the boundary wall and veranda. No one was injured in that incident.

Afridi had been practicing journalism for the last ten years and was president of the Bara Press Club. He leaves behind three sons, three daughters and a widow. A son and a daughter are deaf and dumb and another boy lives with mental retardation.

In a joint statement, KhUJ President Malik and General Secretary Yousaf Ali, Peshawar Press Club President Saiful Islam Saifi and General Secretary Shahid Hameed strongly condemned the terrorist attack on the journalist. They said that the government has failed to protect the lives of journalists across the country despite pressing demands by the representative bodies of the media people.

A large number of journalists from print and electronic media staged a protest demonstration after the funeral prayer of the journalist and urged authorities to punish the culprits.