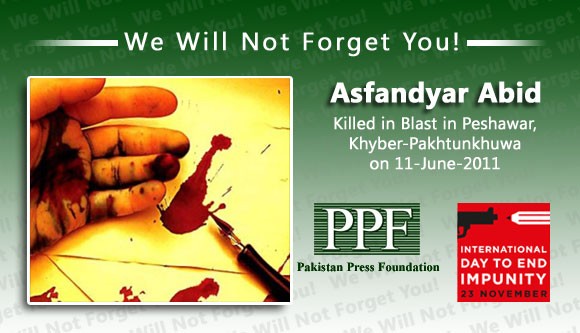 Journalist Asfandyar Abid Naveed, 35, a reporter for the daily “Akhbar-i-Khyber”, was killed and eight other journalists were injured when two blasts ripped through the military cantonment’s Khyber Supermarket, in a commercial and residential area of Peshawar, the capital city of the Khyber Pakhtunkhwa province in Pakistan, late in the night on 11 June 2011.

Around 39 people were killed and more than 100 injured in the blasts. Police investigators believe the first low intensity bomb was planted as a trap to target mostly the police and journalists who were expected to come to the site of the explosion.

According to press reports, a low-intensity blast caused by a small explosive planted in a toilet at the Lala Restaurant at 11:45 p.m. drew rescue workers and police to the scene. The offices of several electronic and print media are also located in the densely populated area and, as such, journalists who work and reside there also rushed to the spot. A few minutes later, a large explosion rocked the area when a man on a motorbike detonated his “suicide vest”, causing a high number of casualties. The second blast left the nearby plazas badly damaged and smashed the windowpanes of several other buildings. The dead and injured were taken to Lady Reading Hospital.

Abdul Haq, of the bomb disposal squad, said that two kilograms of low-quality explosive material were planted at the restaurant. He said the suicide bomber used about 12 kg of explosives mixed with ball bearings.

Meanwhile, the Taliban have denied responsibility for the blasts. Tehrik-i-Taliban Pakistan spokesman Ehsanullah Ehsan said they did not carry out the attack.

On 22 December 2009, Naveed survived a suicide bombing that ripped through the Peshawar Press Club. He sustained minor injuries in that incident. He was also previously struck by a speeding bus, resulting in fractures in one of his legs. Following that incident, he was hospitalised for several weeks and lost his job. He recently began his new position at “Akhbar-i-Khyber”. His parents are no longer living and he was unmarried. He left behind two sisters. The Pakistan Federal Union of Journalists (PFUJ) condemned the blasts in Peshawar. In a statement, PFUJ Secretary-General Amin Yousuf said it was another dark day for the journalists’ community as one more colleague lost his life in the line of duty. He said journalists risk their lives in their quest for truth, without caring about their own safety. PFUJ President Pervaiz Shaukat demanded that the organisations and media outlets for which journalists who have been killed or injured worked compensate their families.

Meanwhile, the Khyber Union of Journalists (KhUJ) and the Tribal Union of Journalists (TUJ) also condemned the blasts and called on the government to take steps to protect media personnel. In a press statement, KhUJ president Arshad Aziz Malik and secretary general Yousaf Ali said that the area in which the blasts took place is dominated by newspaper and television station offices. In an emergency meeting chaired by its president, Safdar Hayat Dawar, and general secretary, Hairan Mohmand, the TUJ demanded compensation for the families of the victims.