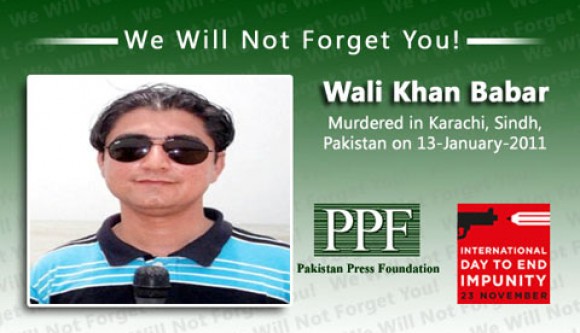 Wali Khan Babar, 29, reporter of Geo News, Pakistan’s largest private television news channel, was gunned down by unidentified armed men in Karachi on 13 January 2011. Babar received five bullets – two in his forehead, one in the jaw and two in his neck. He was killed shortly after covering an operation against drug-traffickers in the Pehalwan Goth area in Karachi.

According to press reports, Babar was returning home from the Geo News office after performing his professional responsibilities, when two assailants on motorcycle intercepted his car at 9:21 p.m. and shot him five times through the driver’s window at close range. Eyewitnesses told journalists that Babar’s car was stopped by the attackers who, after confirming his identity, shot him dead.

The Deputy Inspector General of Police (DIG), Sultan Khawaja, ruled out attempted robbery as the motive behind the firing, saying “it appeared to be a premeditated murder”.

Although they were not able to pinpoint the exact reason for his death, a number of his senior colleagues at Geo News believe that Babar was killed as a result of his journalistic work. Azhar Abbas, Managing Director of the Geo Television Network, said that they don’t know who is behind this, but they definitely take it as a message for the entire media community. He added that this reflects a dangerous trend of intolerance aimed at targeting the media personnel who reveal the truth.

No one has claimed responsibility for the murder. The Police have lodged a criminal complaint filed by the deceased’s brother, Muhammad Khan Babar.

Babar leaves behind his widowed mother, three sisters and four brothers. The Pakistan Federal Union of Journalists (PFUJ) has condemned the killing of Babar and decided to observe a country-wide ‘black day’ on Friday 14 January 2011, by staging protest rallies and hoisting black flags in the offices of journalists’ unions and press clubs to express their resentment.

The PFUJ said this incident has once again proved that working conditions in Pakistan for media practitioners are neither conducive nor safe and the killing of media persons has become the order of the day. The PFUJ further pointed out that despite the repeated killings of media persons, none of the killers has so far been brought to justice. This situation of impunity speaks volumes about the violence and lawlessness in which media persons are forced to perform their professional assignments without any security, insurance, or training.